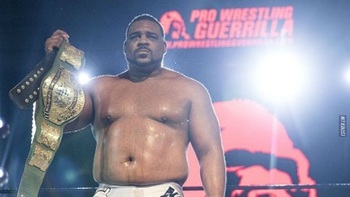 "BASK IN MY GLORY!"
Advertisement:

Previously a football player, Lee got his start on the Texas indies before being signed to Ring of Honor, where he tag-teamed with Shane Taylor as part of the "Pretty Boy Killers". He began to become a phenomenon on the indies however when he started branching out, and has since wrestled for Limitless Wrestling, EVOLVE, WWN, Pro Wrestling Guerilla and WWE. He was released from WWE on November 4, 2021 in the latest round of WWE's slash-and-burn mass talent releases. On the 2/9/2022 episode of Dynamite, Lee would make his debut for All Elite Wrestling.

He is not connected to A.J. Lee, Kimber Lee (though they did wrestle each other in Beyond Wrestling), Trevor Lee, Brian Lee, Kwik Kick Lee or any other Lees in wrestling.

"BASK IN MY TROPES' GLORY!"