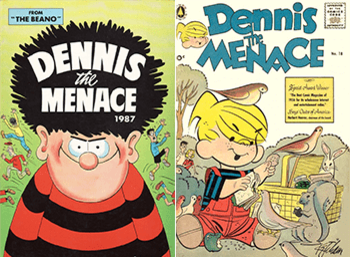 When unrelated shows have characters who have the very same name. Most of the time it's unintentional. Nevertheless, sometimes the similarities in situation or personality are strong enough to inspire quite interesting Crossover Fan Fiction and Epileptic Trees.

This is, in essence, an Aversion of a Shout-Out (although there are occasional cases where it's actually done as a Shout Out). Said characters happen to have a few similar attributes and the same name (unless the name is a single word, not "a similar name" nor "The same first name" nor "The same last name". The entire name is the same), but it's meaningless, or not overly significant.

Alice Allusion, My Hero, Zero, and Name of Cain are subtropes. Compare and contrast One Mario Limit and One Steve Limit. See also Unfortunate Names, Acronym Confusion, The Danza (when this trope applies to a character and his/her actor/actress) and Named Like My Name (when a character acknowledges that that character has the same name as a celebrity). When imposed on a character by the character’s parents (or other namers) may lead to a Who Names Their Kid "Dude"?. May lead to Historical Character Confusion.

In articles or discussions of obscure works featuring such a character, first mention of said characters name would be followed by the phrase, "No, not that one". This is more typical when the character shares a name with a much more well known counterpart. (Do not do this on TV Tropes, not unless it's a defining aspect of the subject. Most of the time, it's Trivia, and belongs in the Trivia tab.)

When this applies to a title, they are Similarly Named Works.

When there is a large number of entries in a section, they will be ordered in alphabetical order by last name first, to make it easier to find previous entries and the name that more than one party or thing has will be in bold. If you add an entry to a subsection organized this way, please go along, thanks.

Alternative Title(s): Name Is The Same