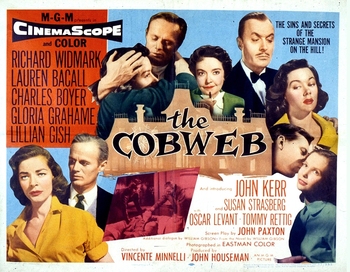 The Cobweb is a 1955 drama film directed by Vincente Minnelli.

It is about the the dysfunctional relationships and power dynamics between the staff at a high-end mental health clinic devoted to nervous rich folk—the exact opposite of a Bedlam House, in other words. Dr. Stewart McIver (Richard Widmark) is the new director at the clinic, having supplanted long-time director Dr. Charles Devenal (Charles Boyer). Charles is not thrilled about this. Neither is Vicky Inch (Lillian Gish), a starchy, mean-spirited administrator at the clinic who doesn't like Stewart for bringing in his new style and new ideas and doesn't like Charles for having knuckled under to Stewart.

The staff's personal lives are just as complicated as their professional ones. Stewart's wife Karen (Gloria Grahame) stews in frustration as Stewart gives more and more of his attention to his work and less and less to her. Stewart for his part is starting to develop feelings for Meg Rinehart (Lauren Bacall), a young widow who is a member of the staff. Charles is attracted to Karen. Vicky doesn't like anyone.

Conflicts are brought to a head by the order of new curtains for the library. The penny-pinching Miss Inch orders cheap, ugly curtains. Stewart and Meg, independently of Miss Inch, hit upon the idea of letting the patients design new curtains as part of their therapy, led by Stevie (John Kerr), a troubled young artist who had a breakdown after his mother died. And independently from any of them, a bored Karen, looking for something to do, orders fancy designer curtains.

Besides all of the stars listed above, Fay Wray of King Kong fame appears as Dr. Devenal's wife Edna.