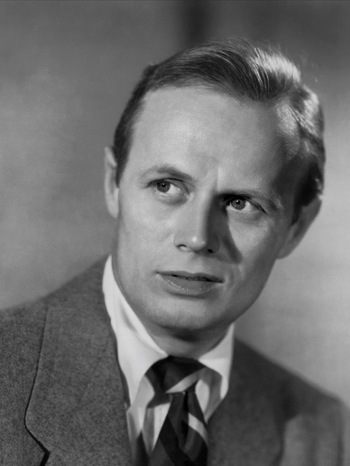 "I think a performer should do his work and then shut up."
Advertisement:

Born in Minnesota and raised in Illinois, Widmark appeared on stage and in radio prior to making his film debut as the giggling, psychotic criminal Tommy Udo in the 1947 film noir Kiss of Death. Widmark's role as Udo earned him an Academy Award nomination and left such an indelible impression on audiences that he would continue to be typecast as villains for much of his career.

Widmark was married to screenwriter Jean Hazlewood from 1942 until her death in 1997, and then to socialite Susan Blanchard from 1999 until his death in 2006. He had one daughter with Hazlewood.