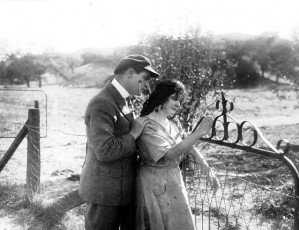 Her Defiance (1916) is a short film (two reels, so approximately 22 minutes) directed by Cleo Madison and Joe King.

Adeline (Cleo Madison) is a young woman who lives on a farm. Her brother Theron promises her in marriage to their crusty old neighbor, Scapin. However, Adeline has fallen in love with Frank Warren, a rich city boy who meets Adeline when he comes to the countryside on business. Her brother distrusts the city slicker but Adeline insists that Frank loves her.

Frank does love her, but he is called away on no notice by his father, who needs him for an urgent business deal. Frank leaves a note for Adeline explaining what happened but it never gets delivered. Meanwhile, Adeline has just figured out she's pregnant. Unwed, baby on the way, and living in the country, she elects to marry gross old Scapin after all.