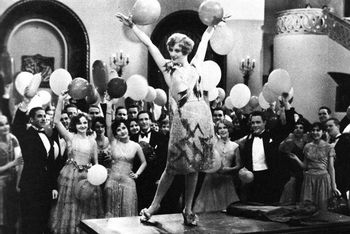 Our Dancing Daughters is a silent film drama made in 1928.

Joan Crawford stars as Diana Medford, a beautiful and popular young woman who appears to be spoiled but is actually a moral upright person. She's best friends with Ann, a gold-digging flapper. Both are in love with Ben Blaine, a millionaire. Ben thinks that Diana is disinterested in him because she flirts with everyone, and marries Ann, who only wants his money. Diana is going to leave at this distressing news. Ben's sister decides to throw Diana a going-away party, which Ann wants to attend with her real love, Freddie. Ben attends behind Ann's back. What will happen when Diana and Ann see each other?

Star-Making Role for Crawford, who had gotten a couple of Love Interest parts with MGM but became one of the biggest actresses at the studio with the success of this film. Followed by Our Modern Maidens and Our Blushing Brides, which weren't sequels (there was no continuity) but dealt with similar themes, all starring Crawford as a young woman in New York finding love and romance.