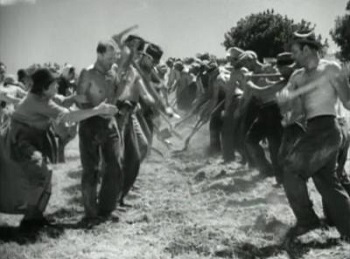 Our Daily Bread is a 1934 drama film directed and co-written by King Vidor as a sequel to his silent classic The Crowd.

John and Mary Sims (Tom Keene and Karen Morley) are two of the many people struggling in New York City during The Great Depression, facing eviction threats from the landlord and exchanging their possessions for meat while John desperately searches for a job. One day Mary's Uncle Anthony (Lloyd Ingraham) comes to their shabby little apartment and offers them a chance to work on a farm that he owns. With no other options, John and Mary jump at the chance and go off to the country, but they are city folk and out of their element on the farm.

One day a man named Chris Larsen (John Qualen), who was trying to make it to California along with many other desperate people during the Depression, has his car conk out right in front of the Sims farm. Luckily for John, Chris is a farmer, and John offers to let him stay rent-free in return for helping John work the farm. John, inspired, puts out signs advertising for people that have trades to come and work on the farm. They wind up establishing a "community where money isn't important", where everything goes into "one common pot". However, their socialist farming commune soon faces two problems: sexy Sally (Barbara Pepper), who wanders onto the commune and tries to lure John away, and a severe drought that threatens to destroy their crops.

Our Daily Bread was a labor of love for director Vidor, who wrote the film's story himself (with his wife, Elizabeth Hill, writing the scenario and a young Joseph L. Mankiewicz providing dialogue.) After MGM declined to produce the film, Vidor raised the money himself and released it through United Artists with the support of Charlie Chaplin.