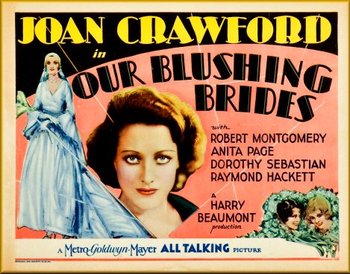 Crawford, Page, and Sebastian are Gerry (for Geraldine), Connie, and Franky (for Francine), three single girls who share an apartment in New York City and work together at Jardine's Department Store. Connie and Franky are salesgirls while Gerry works as a "mannequin" showing off Jardine fashions for rich customers.

Gerry and Connie are in love with, respectively, Tony and David Jardine, the handsome young sons of the family that owns the store. Gerry is besotted with Tony Jardine (Montgomery), but he's a playboy, and Gerry is not interested in becoming a notch on his bedpost. Connie and David Jardine (Hackett) are dating. Franky, who is unapologetic about looking for a rich husband, appears to have found one in Marty Sanderson (John Miljan), a rich guy who strolls into the department store one day and spends $576 in 1930 money on blankets. Eventually Gerry gets engaged to David while Franky marries Marty, leaving Gerry the only one still working at the store after she fends off Tony's advances—but both David and Marty have secrets.