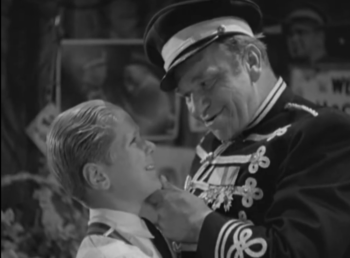 Michael "Windy" O'Shaughnessy is a wild animal trainer in the circus. He is married to a trapeze artist, and has an adoring son called Stubby. His wife's sister, Martha, is in town. She convinces his wife to run away with her and the child. Distraught and unable to focus, Michael loses his arm to a tiger while practicing a trick. He quits the circus to look for his wife and son, but with no luck.

Years later, his wife dies and custody of Stubby is given to him on a trial bases. Now, he must earn back the love of his son and his position in the circus, while undoing the programming of Stubby's evil Aunt Martha.