Film / One Night of Love 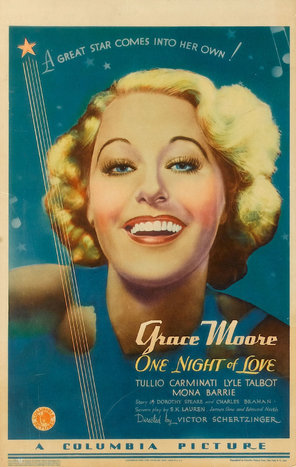 One Night of Love is a 1934 film directed by Victor Schertzinger, starring Grace Moore.

Mary Barrett is an aspiring opera singer. After losing a radio talent contest, she decides she's going to be an opera singer no matter what, and takes off to Italy. She struggles to find work and eventually settles for a job in a cheap cantina—where she is noticed by Giulio Monteverdi, a famous vocal coach. When Giulio barges into her dressing room and demands that she move in with him, Mary gets the wrong idea. Giulio corrects her, saying that he is not interested in any romance, and in fact had to fire his last protege when romance got in the way of her singing. No, Giulio wants Mary to live with him because she has the potential to be a great soprano voice, and she must move in to his house so he can devote himself full-time to developing her talent.

While many of the Hollywood songbirds of the day—Jeanette MacDonald, Deanna Durbin, etc—were merely actresses who could sing, Grace Moore was a legit opera star who made her debut at the New York Metropolitan long before she ever appeared in a movie.