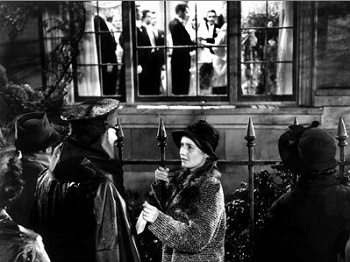 Stella Dallas is a 1937 Melodrama starring Barbara Stanwyck, directed by King Vidor. Stella Martin is a young woman in a mill town in 1919. She deliberately attracts the attention of Stephen Dallas, a supervisor at the mill. They hit it off and get married. They have a baby, Laurel, but soon figure out that they have nothing in common—Stella is loud, brassy, and fun, while Stephen is a boring, drippy, narrow-minded scold. Eventually they separate.

Years go by and Laurel grows to be a teenager, living with her mother, seeing her father only occasionally. Stephen strikes up a renewed relationship with Helen Morrison, his old girlfriend, who married another man but is now a widow. Stella for her part pals around with Ed Munn, her alcoholic neighbor, but has no interest in a new relationship, focusing on her daughter. Stephen wants Laurel to live with him and the Morrisons in a mansion, but Stella refuses to give him a divorce. Stella tries to give Laurel the high-society life that Stephen is offering her, but her own tacky brashness embarrasses her daughter.

Depending on where one falls on the Sliding Scale of Idealism Versus Cynicism, one may find this movie either a tender story of motherly love and self-sacrifice, or one may find it emotionally manipulative. It was based on a novel, had been made before as a 1925 silent feature, and was made again in 1990 with Bette Midler as Stella. Stanwyck, who never won an Academy Award, received one of her four Best Actress nominations for this movie, and Anne Shirley (teenaged Laurel) got a nomination for Best Supporting Actress.