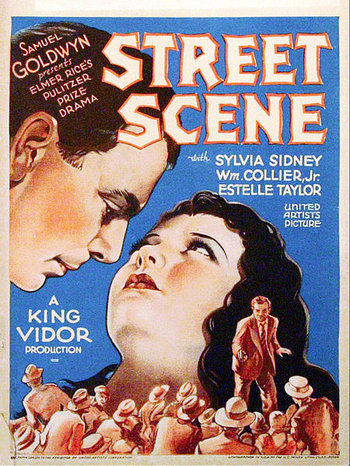 Street Scene is a Pulitzer Prize-winning play written in 1929 by Elmer Rice.

It takes place in June of 1929, in front of a New York City brownstone apartment building, and is about the various tenants who live there. This contemporary play deals with the issues of urban life and of the immigrants who live in these apartments. The plot of the play surrounds the Maurrant family, who are the subject of local gossip alleging that the wife, Anna, is cheating on her husband Frank. Their daughter Rose yearns to move away from the apartment and has to deal with the obstacles to achieving that goal.

Elmer Rice contributed to two major adaptations of the play: a 1931 film, directed by King Vidor and starring Sylvia Sidney as Rose, and a 1947 musical (or "an American opera") with music by Kurt Weill and lyrics by Langston Hughes.

The musical version also has examples of: