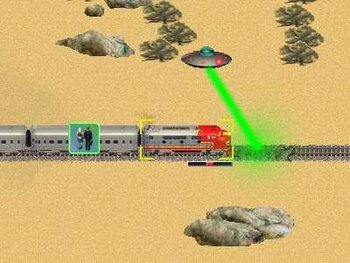 Good luck explaining this to the stationmaster.
3-D Ultra Lionel Traintown is a 1999 Puzzle Game from Sierra Attractions as a part of their 3-D Ultra line of computer games.
Advertisement:

The game consists of various "jobs" that must be completed using various Lionel-brand miniature locomotives. Jobs range from picking up and delivering loads, guiding automated commuter trains with semaphores, fixing and repairing train tracks and switches, and various memory games. After finishing all the jobs on each difficulty level, a "final job" is unlocked, which usually introduces a unique mechanic specific to that level (loads costing money, objectives coming in stages, etc.) and usually awards the player with a unique animation once the job is completed.

In addition to stand-alone jobs, there are various themed jobs that carry over from each difficulty level. They include: