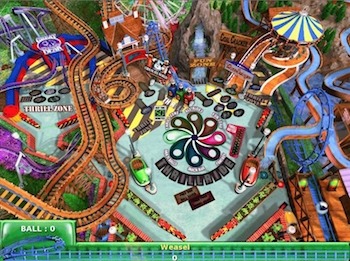 3-D Ultra Pinball: Thrill Ride is a Digital Pinball game developed by Dynamix and published by Sierra for Apple Macintosh and Microsoft Windows. Based on the Real Life Hersheypark Theme Park in Hershey, Pennsylvania, the game requires the player to perform various ride related-tasks to score points, and ultimately try to stay through the night.

Most of the action takes place with the various Fun Zone puzzles on the primary table, but making key shots will open additional areas and events. You play as a guest visiting the park with one goal in mind: ride every single ride in the park. Go on real-life rides like the Wildcat, the Coal Cracker, and the Wave Swinger, then warp over to the Thrill Zone mini-playfield for additional challenges. Visit the snack shop for bonuses and prizes, clear the rapids, collect Brass Rings and Ride Photos for extra points, and try to stick around long enough for Lights Out, and a chance to see the Nighttime Fantasy fireworks show.

Unlike earlier games in the series, Thrill Ride edges back to a more conventional pinball feel, de-emphasizing the overall quest in favor of simply getting a high score, making the game more accessible for casual players. The updated graphics engine supported resolutions up to 800 x 600 and High-Color displays, delivering great special effects and realistic graphics.

A version of this game was developed for the Nintendo Game Boy Color, but bears no resemblance to the original aside from the name and general premise. Much like Pokémon Pinball, the cartridge has a rumble pack.