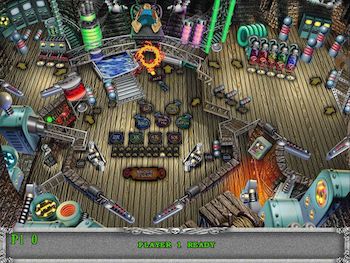 Full Tilt Thrills in a Ghoulish Pinball World
"Welcome to our castle! Stay for a spell!"
Advertisement:

3-D Ultra Pinball: Creep Night is a Digital Pinball game developed by Dynamix and published by Sierra. It is the second game in the 3-D Ultra Pinball series, and was released for the Apple Macintosh and Windows 3.1 PCs.

The premise of the game is that, after a hundred years of dormancy, a vortex to the Underworld has opened, releasing a horde of gargoyles, zombies, ghosts, and other supernatural creatures. As they wreak havoc in a haunted castle, the player must use their pinball skills to defeat them from the Castle courtyard, Tower laboratory, and Dungeon catacombs. For a change of pace, activate various dimensional portals and play various mini-games with the mischievous goblins. Defeat the denizens on all three tables, then unlock the secret table and confront the Goblin King in an attempt to vanquish his minions and seal the vortex for another hundred years.