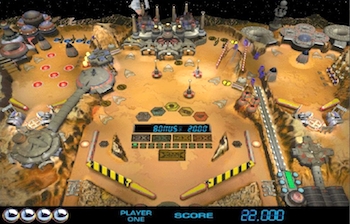 3-D Ultra Pinball is a computer pinball game for the IBM Personal Computer and Apple Macintosh. It was developed by Dynamix and published by Sierra in 1995, and is the first game in the company's "3-D Ultra Pinball" series.

Based loosely on Dynamix and Sierra's Outpost, the goal of the game is to build a deep space colony and launch a starship. This is done by playing pinball in three areas — the Colony, the Operations Center, and the Mine — each with a primary playfield and several connected mini-playfields. As Mission Control gives instructions, invoke various extra modes, warp between tables to complete challenges, and watch out for hidden levels. The game fully embraced its digital pinball heritage, and modes would feature wandering enemies, transform parts of the playfield, or temporarily change the rules of physics.

3-D Ultra Pinball used pre-rendered playfields throughout the game, offering detailed graphics and fast action at the cost of a fixed camera. Even so, some pixelation was present, as the game was originally designed for Windows 3.1, with playfields rendered at 640 x 480 resolution and 256 colors. But the title's biggest weakness was its physics engine — precision aiming is nearly impossible thanks to the very floaty ball and inconsistent ricochets, the table nudge is useless, and most Real Life flipper catches and ball passes aren't possible.

Despite these issues, the game proved to be a surprise hit for Sierra. The company followed it with several more 3-D Ultra Pinball titles, as well as a series of non-pinball "3-D Ultra" games, such as 3-D Ultra MiniGolf and 3-D Ultra Radio Control Racers.