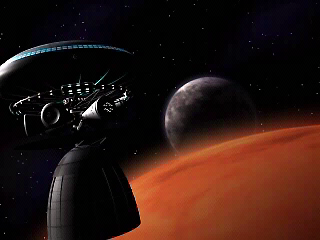 "It was cold, dry, nearly airless. But they saw... possibilities."
"Historical overview: The earth is dead. As the asteroid fragments landed, the last few survivors departed the solar system, seeking a new home among the stars."
— Opening Narration, Outpost 2
Advertisement:

Outpost 2: Divided Destiny is a 1997 Real-Time Strategy game developed by Sierra. In the game's backstory, the Earth is threatened by a massive asteroid impact, and all attempts to avert it fail. To avoid extinction, humanity throws its resources into a rushed evacuation program, which would take as many people as possible in cold sleep aboard the resultant starship 'Conestoga', and try to find a new world to colonise. World after unsuitable world was rejected by Conestoga's on-board computer, until, with resources to continue the journey failing, the ship woke a few of its sleepers and asked them to choose between a barely suitable planet it had just found, or press on with the little it had left in the faint hope of finding somewhere better. Choosing the former, they name the planet, a lifeless, Mars-like world, "New Terra", and optimistically name their colony "Eden".

Things go well, to begin with. With Eden established, it grew, and even began to thrive. However, with survival no longer so pressing or immediate a concern, the issue of the long-term direction to be taken arises, and divides the colonists. The initially suggested plan to terraform the planet into a new Earth did not sit well with many, who wanted instead to adapt themselves to New Terra's harsh environment. After a short time these detractors depart with a share of the colony's resources (having argued that two colonies had a better chance of survival than one anyway) and found a splinter colony named "Plymouth".

However, Eden refuses to back down on their plans to begin terraforming. After a short time in negotiation, it becomes clear the two groups' views cannot be reconciled, and in a gesture of disgust, Plymouth shuts down the only satellite connecting them, severing communications between the two colonies completely (although the Plymouth council were unaware that the rough-and-ready communications provision that came with them to New Terra wasn't designed to be powered down once operational). Eden goes ahead with its terraforming plans, but when their experiments go horribly wrong due to an over-ambitious and impatient leader's demands, and Plymouth is threatened by a suddenly and inexplicably active volcano, both colonies are faced with disaster, and the planet just doesn't have enough room for the two of them. Both colonies can agree on only one thing: Extinction is not an option.

Outpost 2, unlike other RTS games, focuses less on the military aspects of the genre and instead requires the player to manage their entire colony. Residences, recreation centers, and agridomes are all part of the colony alongside vehicle factories and mines. Keeping the colonists happy, healthy, and well-fed is essential to keeping the colony growing and productive. Outpost 2 is also notable for its detailed storyline, which is presented in a novella, with one chapter accompanying each mission briefing and two alternative storylines depending on your chosen faction. All There in the Manual, indeed.

Outpost 2 is the sequel to Outpost (although it ignores the events of its predecessor), a game best described as Simcity IN SPACE!. The original Outpost was highly anticipated and well-reviewed before its release, but afterwards it became clear it was missing several advertised features and was not well-received. Outpost 2 has a far, far more complete implementation of the colony-management game from Outpost mixed with RTS elements, as well as taking itself rather more seriously, not to mention an understated but very nice musical score, but suffered because it was sold as a sequel. However, the game stands well on its own as a unique twist on the RTS genre.