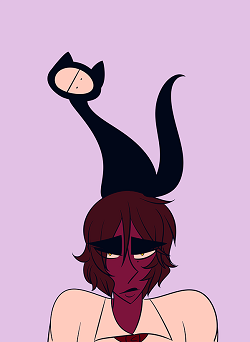 i detest that spiky child
"I want to kill the person I used to be."

is a webcomic by d. Marie Licea, hosted on Tumblr. It follows the life of Anala Karpe, a former Avazon who, for as-yet unexplained reasons, despises her past self and the Avazon organization.

Anala is currently trying to lead a somewhat-normal life as a high-schooler, but is perpetually pestered by Couriers - essentially recruiters for the Avazons - to join up with them. Although it's implied that Anala is already an Avazon (or possibly ex-Avazon) under the pseudonym Phoenix Flair, no one seems to be aware of this, not even the Couriers themselves. Between the Couriers and her daily life, Anala is at wit's end - and to make matters worse, she feels obligated to try and dissuade other young girls from becoming Avazons themselves - a task that's easier said than done.