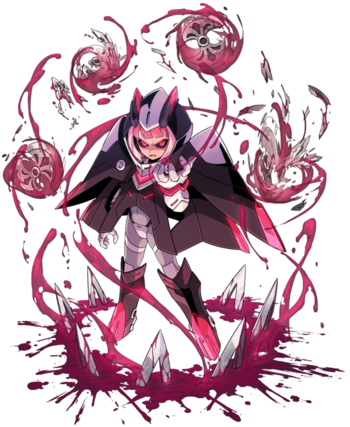 Something — whether it's a tool, a weapon, an accessory, etc. — can be made out of regular iron, of silver, of Thunderbolt Iron... this one's metal came from an unusual, yet completely real source.

The blood of many advanced organisms contains iron. Theoretically, something could be made out of it. Of course, there is a good chance the source of that blood will die. Perhaps many will die. After all, there are only a few grams of iron in a person's blood.note The average human being has approximately 3.5 - 4 grams of iron in their body, the majority in their blood, this being enough to make a nail about 3 inches long! As such, the item made in this way will likely be evil (as Blood Magic tends to be).

Related is the idea of quenching a newly-forged blade in blood, possibly by stabbing it through a living body, which is said to give it a soul. This absolutely would not work in real life.

A variant of characters who manipulates/uses blood as a weapon is one where they can create stuff (usually weapons) with the iron from the blood, whether it's theirs or from other people.