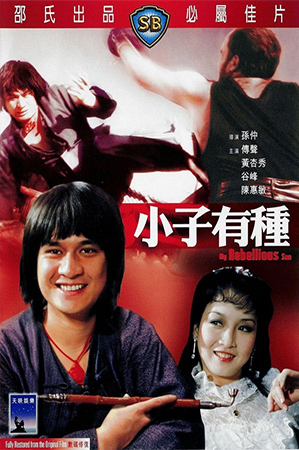 Fu Sheng (in his last leading role as titular protagonist, before his untimely death two years after this movie) is Cheng Siu Tai, a rebellious (see the title?) young punk and kung fu practitioner, and the only son of Master Cheng Tak Tai, an esteemed healer and martial arts teacher in town. While reluctant to help out his father in their family's clinical business, Cheng unfortunately ends up in trouble after a fight with some local punks, which leads to the Cheng family's heirloom, a priceless relic, gets targeted for theft. One thing leads to another, and Cheng ends up fighting against a rival kung-fu academy led by Master Robert Tang (Shaw villain veteran Johnny Wang), a pair of huge western brawler brothers, a rival fencing expert and a trio of deadly samurai led by the Japanese kendo expert Yamaguchi (Michael Chan).

The plot bears an uncanny resemblance to Jet Li's Fearless (2006); a hotheaded kung-fu expert learning to mellow out, the theme of honour among wushu practitioners while facing Japanese and Western challengers, a setpiece which is a battle on a boxing ring where the relatively diminutive protagonist battles a huge Western brute in a David vs. Goliath battle, and a finale where the hero takes on all his challengers in a competition, one-at-a-time. But while Fearless is a serious drama, this movie takes whatever tropes Fearless has and plays all of them for laughs, with the comedy running fast and loose everywhere.