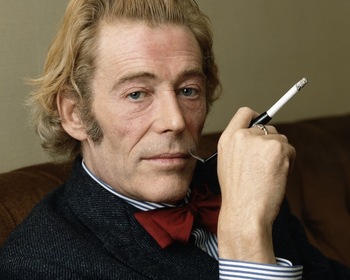 "I hitched to London on a lorry, looking for adventure. I was dropped at Euston Station and was trying to find a hostel. I passed the Royal Academy of Dramatic Art, and walked in just to case the joint."
Advertisement:

His Star-Making Role was Lawrence of Arabia in 1962. Regarded as one of the best actors of all time, he received a record of eight Academy Award nominations without ever winning one. However, in 2003 the Academy gave him an Honorary Oscar for his entire body of work and his lifelong contribution to film. On July 10, 2012, Mr. O'Toole announced his retirement from acting. He passed away on December 14, 2013 at age 81 after a long illness.

Though he preferred to be called Irish all his life, claimed he was born in Connemara, and had an Irish and an English birth certificate, records verify O'Toole was really born in Leeds, and he grew up in Yorkshire. His parents were Irish and Scottish. Nevertheless, Ireland happily claims him as one of her own. His ashes even resided temporarily in Áras an Uachtaráin, as he was a personal friend of President Michael D Higgins.