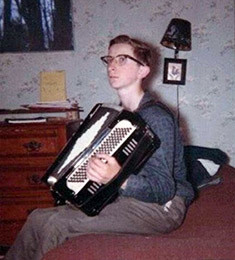 A character's coolness factor is often demonstrated by what music they prefer—whether it's the popular guy who likes popular bands, someone out of touch who still listens to disco (or older music), or a complete dork who likes polka. This trope is about that dork.

He probably also plays the accordion. Since the accordion, and polka, are often associated in the US with an aged demographic, it's certainly not going to be cool for a young person there to admit to enjoying them.*** Except for Mexican norteño music, which is actually what cool young people listen there.

Not to be confused with an Accordion Man. Compare to Quirky Ukulele. Contrast with French Accordion and Accordion to Most Sailors.

Note: In recent years, especially with the popularity of "Weird Al" Yankovic, who made this part of his comedic persona, and Mexican norteño music, as well as the advent of Steampunk as well as "nerd" culture, there has been somewhat of a reversal of this trend (even Christina Hendricks proudly plays the accordion!) and it borders somewhat on the verge of becoming a Dead Horse Trope.