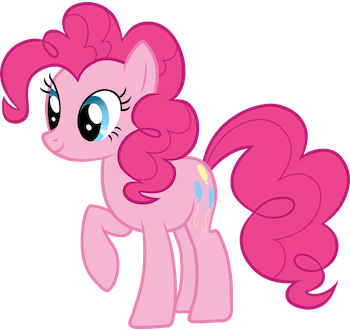 "Fill my heart up with sunshine, SUNSHINE!

"
"♪ This is your singing telegram; I hope it finds you well,
You're invited to a PARTY 'cause we think you're really swell! ♪"
Debut: "Friendship is Magic, part 1" ("Mare in the Moon")
Voiced by: Andrea Libman, Suzuko Mimori (Japanese)
Singing by: Shannon Chan-Kentnote Andrea Libman provides her own singing voice on occasion

The bearer of the Element of Laughter. Pinkamena Diane "Pinkie" Pie is a hyperactive earth pony who prances to the beat of her own percussion section. The sheer force of her cheerful personality can be overwhelming at first, but anyone who shows a little patience with her eccentricities is rewarded with a truly unique and wonderful friend who fills every day with laughter. And musical numbers. And PARTIES! Even as she defies physical reality when the situation is funny. Try to imagine a pink rocket made of happiness.

That's Pinkie Pie. Her Pillar of Old Equestria is Somnambula.