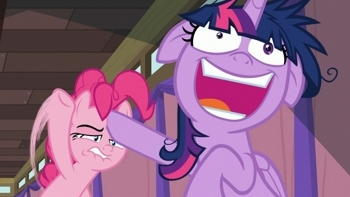 Becoming a three-time champ is not a trivial pursuit.
Written by Brittany Jo Flores
Advertisement:

Twilight hopes to win Trivia Trot, a regular trivia contest, for the third time in a row. In planning, she has worked out all the statistics with the contest regulars, and knows what her chances are for whomever she may be paired up with. To her horror, Pinkie decides to join the contest that week, a factor Twilight hadn't considered. Further, she starts to stress out when she is paired with Pinkie. Pinkie is elated, figuring they will have a lot of fun together, but Twilight continues to panic over breaking her winning record.

In the first part of the game, Twilight finds Pinkie's unique takes on the questions to be putting her quickly in last place. Twilight tries to help coach Pinkie into focusing on the questions and answering quickly, but Pinkie keeps on causing distractions. During a break, Twilight frantically tries to ask for Spike's help, which leads to her to recalling the rather in-depth rules that Trivia Trot is run under. As the next round starts, Twilight starts to call out other teams on seemingly minor rule infractions — she has Cranky Doodle disqualified since he was sleeping, sending Sunburst to the sidelines, and has points taking from the other teams for these rules. However, one team — Maud and Mudbriar — remain unphased by Twilight's antics, and are in a clear lead. Twilight, panicking, comes across another solution: she tricks Pinkie into purposely breaking the rules. Because of this, and per the rules, Twilight is able to gain Sunburst as a partner for the remainder of the match. While Twilight is elated, since Sunburst has the highest correct-answers in Trivia Trot and will make her win a shoe-in, Pinkie mopes in the corner.

As the contest picks back up, Twilight and Sunburst close the gap but still trail Maud and Mudbriar. Twilight starts to get more frantic with her answers, and Sunburst starts denying her access to the bell so that she doesn't get their answers wrong. Sunburst reaches the end of his rope, and nearly tricks Twilight into breaking the rules herself, but she catches herself, and then realizes what she had done to Pinkie. Calling for a brief break, Twilight goes to apologize to Pinkie, who just wanted to have fun. As Cranky has woken back up, the rules allow for the disqualified players to rejoin the game, but with zero points: Twilight has no problem with this to bring Pinkie back in, knowing that they will not likely win but they will certainly have fun together.