Recap / My Little Pony: Friendship Is Magic S9 E1 "The Beginning of the End  Part 1" 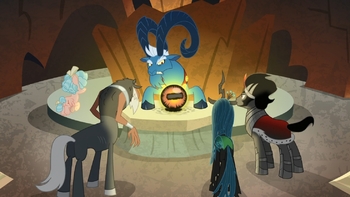 Gather round my Herd of Doom! It's time for the final season!
"Long live the king."
— King Sombra
Written by Joanna Lewis and Kristine Songco
Advertisement:

Twilight and her friends race to Canterlot, alarmed by an urgent summons from the Two Sisters. Thinking something is terribly amiss, they are surprised to learn that Celestia and Luna believe that because of all that Twilight and friends have done to protect Equestria, it is time for them to step down. Despite Discord's sudden appearance wondering if they want him to take over, Celestia says that they plan to transfer rule of Equestria to Twilight with her friends to help support her. However, it will take several days for them to complete the necessary procedures before they can give Twilight this authority. Back in Ponyville, Twilight is already panicking how she will be able to run an entire kingdom, but her friends, well aware of her "Twilighting" freak-outs, try to assure her that she'll do fine.

Elsewhere, Queen Chrysalis, Lord Tirek, and Cozy Glow are transported to an unknown place, and King Sombra is resurrected by a mysterious ritual. The four wonder why they are gathered before they meet the one that brought them there: Grogar, an ancient goat who once ruled Equestria with an iron hoof and who wants to do so again, though Twilight and her friends stand in his way. Grogar knows that they have all individually failed in their attempts to conquer Equestria, and proposes that they form an alliance and work together to defeat Twilight. Sombra refuses, believing he can beat them on his own this time. Grogar agrees to let him try and keep the Crystal Empire if he succeeds, though he stipulates that when he fails he will join Grogar's team and toe the line. Sombra declines the wager, with Grogar warning that with his refusal to join him, Grogar will leave him banished to the ether once he is defeated. Unswayed, Sombra travels to the Crystal Empire, quickly seizing the Crystal Heart and enslaving enough of the population to be able to seize the royal family.

Cadance is able to send a message off to Twilight before she is captured. Twilight wonders if she should tell the Princesses, but Discord asserts that this should be seen as her first true test of running Equestria. Twilight agrees, and after leaving Starlight and Spike to watch over Ponyville and the school, she and the Mane Six recover the Elements of Harmony from the Tree of Harmony, and quickly teleport to the Kingdom. After a brief spat, the Mane Six use the elements to seemingly defeat Sombra. However, after returning the Elements to the Tree of Harmony, black crystals destroy the Tree and shatter the Elements, Sombra having tricked them into thinking they'd won so that he could deprive them of their only means of defeating him. As Twilight and her friends watch in horror, Sombra lets out a triumphant laugh.

Continued in "The Beginning of the End – Part 2".