Recap / My Little Pony: Friendship Is Magic S7 E3 "A Flurry of Emotions" 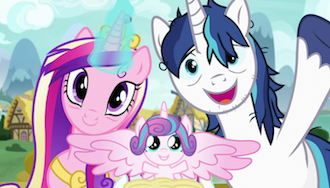 "Surprise!"
"Busy? Would the best aunt ever be too busy to spend time with this adorable little one?"
— Twilight Sparkle
Written by: Sammie Crawley & Whitney Wetta
Advertisement:

Twilight Sparkle learns that the whole class of schoolponies has come down with horsey hives, and works out her schedule with Spike to spend the day with the foals at the hospital after getting them toys, snacks, and a book to read. Just as they are about to set off, a worn-out looking Princess Cadance and Shining Armor show up at the castle. They are there to see a pop-up art show from one of Shining's friends, Spearhead, and ask if Twilight can watch Flurry Heart for a few hours. Twilight quickly takes up the mantle of "Best Aunt Ever" and starts playing games with Flurry, agreeing to watch her even though Spike points out how packed her schedule is. Twilight finds that Flurry has more control on her magic now, albeit to get things her way or to launch mashed peas at Twilight when she tries to feed her. Spike points out that they're running late, and Twilight quickly sets off with Flurry and Spike in tow.

At the toy store, while Twilight is shopping, Flurry still wants to play, and Twilight indulges her by racing a shopping cart through the store. As Twilight checks out, Flurry wants to keep playing, and uses her magic to race the cart she's in right into the middle of a stuffed animal display. Though safe, Twilight spends the extra time to put the display back correctly, losing more time off their schedule. The next stop is at the schoolhouse, where Twilight asks Cheerilee a book for the foals. Again, Flurry still wants to play, but Twilight and Spike's attention are elsewhere, and instead she sees the school's blackboard. She erases Cheerilee's lesson plan from it to draw onto it before Twilight can stop her.

Still running late, Twilight stops at Sugercube Corner, and asks Pinkie for snacks for the foals as well as an "I'm sorry" gift for Cheerilee. She leaves Flurry with Pound and Pumpkin Cake with Spike watching them. However, the Cake get into a fight over a toy, and while Spike tries to find a second one, Flurry takes it on herself to try to resolve the problem by breaking the toy in two and giving each half to the Cake twins. This infuriates the Twins, and they start throwing cupcakes and other baked goods at Flurry. By the time the others notice, the bakery has been made a mess by the food fight.

Finally, they make it to the hospital, only a few minutes behind schedule. As Twilight reads to the foals, Flurry wants attention, but Twilight can't offer it. In a small bit of rage, Flurry loses her favorite stuffed toy Whammy, and starts to panic. She goes into a magical fit, levitating anything not nailed down to try to find Whammy, and Twilight cannot keep up with her magic. Finally, Twilight is forced to yell at Flurry to cut it out; Flurry instinctively forms a shield and shuns away from Twilight. Twilight realizes that she wasn't giving Flurry the attention that she wanted and she has been a terrible aunt. However, she apologizes, and Flurry drops the shield, hugging Twilight. Twilight agrees to help Flurry find Whammy, but only after fixing up the hospital after her magical bout.

Meanwhile, Cadance and Shining visit the art show, finding most of Spearhead's art is a bit too modern. The longer they stay, the more they find that the art reminds them of Flurry Heart, and soon wish they didn't leave her. Spearhead completely understands their situation, and tells them they should be with her instead, and they race back to the castle. They return and Twilight explains what happened, and apologizes for not refusing their offer to watch over her niece with a jam pack schedule, and they apologize too for not giving Twilight more of a heads up. Cadance and Shining Armor agree to give Twilight a bit more notice ahead of time if they need her for foalsitting duties again. The episode ends at the hospital as Spike reads to the sick foals, while they enjoy an apology cake that Twilight got for them.

A Flurry of Tropes: