Continued from "The Crystalling – Part 1". 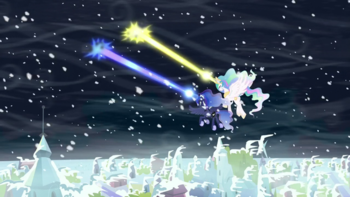 Shoot the Hostile Weather with laser beams! That ought to fix things.
"The baby's an Alicorn and she accidentally destroyed the Crystal Heart, so Twilight and Cadance are looking for a spell to put it back together and save the Crystal Empire from turning into a giant wasteland of ice and snow."
— Pinkie Pie
Written by: Josh Haber
Advertisement:

The Crystal Heart is destroyed, and now nothing can stop the winter storms from burying the Crystal Empire. Princesses Celestia and Luna fly out to delay the weather as long as they can, while Applejack, Fluttershy and Rainbow Dash attempt to herd the gathered citizens to the safety of their homes without inciting a panic. Everypony else flees to the castle library in search of a spell that will restore the Crystal Heart, trying to keep tabs on the newborn alicorn (who continues to fly around, teleport, and blast laser beams) all the while. Meanwhile, Starlight Glimmer decides her old friendship with Sunburst cannot be rekindled and leaves dejectedly without revealing her past. Spike reassures Starlight that she still has their friendship, but she feels that she has failed her first lesson.

The library search turns up a spell of relic reconstitution in an old tome. Twilight scans it once and declares success — just before an errant laser blast destroys most of the book. The princesses cannot buy them any more time, so Twilight attempts to reconstruct the spell from what she remembers. Starlight has the idea to fetch Sunburst, hoping his great magical power can help. Shining Armor and Cadance see that they will lose the battle with the storm and give orders to evacuate the Empire.

Starlight Glimmer appeals to her old friend for help, only to learn his secret: he's not an important wizard, or even a wizard at all. He knew everything about any spell in the book, but he seldom had the power to actually cast them. Shamed, he left Celestia's school for unicorns and settled in the Crystal Empire where no one knew him. Starlight too comes clean about her past: that she used her own magical power for dark purposes and nearly destroyed Equestria as a result. The two of them finally apologize to each other and begin to work out their differences.

Twilight's attempts to reconstruct the Crystal Heart go nowhere, since the spell by itself won't work on a relic so powerful, even with her and Cadance casting it together. Fortunately, Sunburst has arrived. With his knowledge of magic, he explains that only a certain combination of spells can restore an object like the Crystal Heart: the Crystalling itself, a second spell to calm the weather, and "Fledgling's Forbearance" to get the infant's incredible powers under control. Celestia, Luna, Twilight, and Starlight turn their magic on the Heart as Shining Armor and Cadance complete the Crystalling ceremony with their new baby. Sunburst plays the pivotal role of the Crystaller, adding a key fragment of crystal to complete the Heart. When all is done, the Heart regains its power and quickly restores the barrier, shoving back the winter clouds.

As Twilight and Shining Armor's parents arrive at the train station, the baby appears to have her powers under control thanks to Sunburst's spells. Twilight Velvet finally asks what the baby's name is, with Shining Armor and Cadance saying that they've decided on "Flurry Heart." Sunburst and Starlight say their goodbyes, with Starlight saying that Sunburst is a better wizard than he gave himself credit for, and Sunburst promising to keep in touch. Once on the train, Twilight laments that her lesson failed, but Spike counters that everything ultimately worked out, and that the method of letting Starlight learn on her own was the same way that Celestia taught Twilight herself. Twilight is reassured by this, with Spike saying that Twilight is a better teacher than she gave herself credit for. As the train leaves the empire, a small black thing appears heading to the empire.