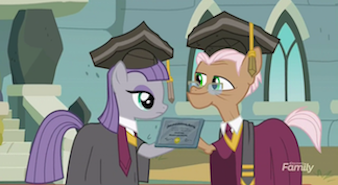 Getting a rocktorate: easy.
Making friends: not so easy.
"I don't belong in Ponyville. It only proved I'm better off all by myself. Like I always have been."
— Maud Pie
Written by Nick Confalone
Advertisement:

Pinkie Pie's sister Maud graduates from her university, earning her rocktorate degree. After the ceremony, Maud must decide between living in Ponyville or Ghastly Gorge. The latter has better rocks, but the former has more people Maud can potentially get along with. Taking the train to Ponyville, Pinkie is enthusiastic about finding a way to make Maud stay. She shows her sister the gem caves, but Maud says they're all common gems. Twilight's castle doesn't impress Maud either, and Pinkie grows increasingly desperate. Soon, Starlight Glimmer exits the castle, bumping into Maud, remembering meeting her before enslaving the town of ponies. Pinkie insists that Maud help Starlight with her chores, hoping that making friends will convince Maud to stay.

While out and about, Maud and Starlight start bonding, talking about Maud's passion for rocks and Starlight's passion for kites. However, Pinkie Pie keeps interrupting them, trying to get them to bond, even though they're doing just fine on their own. While in the gem cave, Starlight and Maud find an underground cavern complete with a waterfall, which Pinkie purposefully traps them in to try and get Maud and Starlight closer. However, Maud effortlessly breaks them out with the use of her pet rock, Boulder. That night, Maud tries to tell Pinkie that she's going too far, but Pinkie won't listen. In the morning, all Pinkie finds is a goodbye note from Maud, saying that she's decided on Ghastly Gorge.

Heartbroken, Pinkie wakes up Starlight and wonders why they didn't click as friends. Starlight replies that they did, but Pinkie kept interrupting and making things worse. Upon hearing this, Pinkie rushes to Ghastly Gorge to apologize to Maud. While dodging giant quarray eels, Pinkie admits that she should have just let Maud do things her own way, and begs Maud to give Ponyville another chance. Maud replies that she knows Pinkie only did what she did out of love, and agrees to move to Ponyville after all, using the cave she and Starlight found as her new home.

Upon learning that her sister Maud inadvertently helped Starlight Glimmer's plan to steal cutie marks, Pinkie Pie awkwardly laughs while halfheartedly suggesting they should never mention that part to any pony. She then makes a point to show she's deathly serious about it.

Example of:
Let Us Never Speak of This Again

Upon learning that her sister Maud inadvertently helped Starlight Glimmer's plan to steal cutie marks, Pinkie Pie awkwardly laughs while halfheartedly suggesting they should never mention that part to any pony. She then makes a point to show she's deathly serious about it.