Recap / My Little Pony: Friendship Is Magic S7 E2 "All Bottled Up" 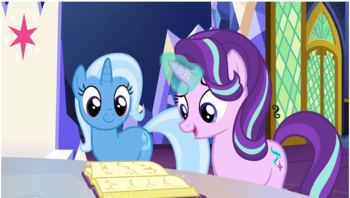 "Magic is friendship, and stuff."
"For a minute, I didn't think you were coming back, and that you might be upset with me for some weird reason. But then I remembered, you never get mad at me."
— Trixie (to Starlight)
Written by: Joanna Lewis & Kristine Songco

Starlight Glimmer and Trixie are baking tea cakes in Twilight's kitchen while Trixie tries to turn a saltshaker into a teacup. After repeatedly failing, Trixie is told by Starlight to visualize what she wants. This causes Trixie's spell to succeed, turning multiple things into cups, including the frosting decorator used by Starlight. Though angry, Starlight manages to calm down long enough to scold Trixie, although she is only left with a bag of pretzels for a snack.

The Mane Six take a train to Manehattan for a friendship retreat, leaving Trixie and Starlight alone in Twilight's castle. Trixie wants to practice more magic, so Starlight suggests a teleportation spell. She places an apple on the Friendship Map, and tells Trixie to visualize where she wants the apple to go. However, a miss from Trixie hits the map instead, causing it to disappear. A panicked Starlight wonders what to do, while Trixie is incredibly nonchalant about the whole affair. This causes Starlight's rage to manifest as a dark red storm cloud. Starlight promptly runs into the kitchen, grabbing a bottle from the shelf, stuffing the rage cloud inside and literally bottling up her anger. Calmer, Starlight suggests wandering around town while trying to find the map, as the map table would have ended up wherever Trixie was thinking of when she cast the spell, although Trixie can't remember where that was.

Meanwhile, Twilight has her friends participate in an "Escape Room Adventure" in Manehattan, where they're locked in a room and have to find clues and solve puzzles to get out. A group of griffons hold the record for the fastest escape (one hour), and Rainbow Dash hopes to break that record. The Mane Six succeed in finding the hidden key, but just as they're about to open the door, they decide to sing a song about The Power of Friendship instead... which results in their failing to break the record by two seconds.

Trixie and Starlight inspect a cinnamon nuts stand, Sweet Apple Acres, and a jewelry store in their quest to find the map, all with no luck. The whole time, Starlight continues to bottle up her anger while remaining calm, though it puts a drain on her magic. Trixie finally notices that Starlight seems exhausted and has been casting a spell on her saddlebag, and tries to peek inside. A brief telekinetic battle ensues, which causes the vial of rage to break, infecting Granny Smith, Bulk Biceps, and a jewelry pony with anger. The three of them suddenly start venting all of Starlight's frustrations at Trixie, chasing her through town and threatening her. Finally, Starlight admits that she was the one who's so mad, but suppressed her anger in order to not ruin her friendship with Trixie. In turn, Trixie admits that it's hurtful to hear Starlight say that, but their friendship is stronger than just a few harsh words. She assures the formerly evil pony that they're still the best of friends, and that she actually likes Starlight for her passion and willingness to speak her mind.

This revelation sparks Trixie's memory: right before casting the teleportation spell, she was thinking about the day she and Starlight met, which means that the map is safely at the Ponyville Spa. They quickly retrieve and bring it home just in time for the Mane Six to return loudly discussing everything they learned during their retreat. Rarity, who was hoping the "retreat" would be more luxurious, suggests that the girls head for the spa to cap the day off. As they head out, Trixie suggests that Starlight use magic to alter the memories of the spa ponies to cover their tracks. Starlight scolds her for not remembering that using magic to solve trouble often causes problems; Trixie responds that she did indeed learn that lesson, but deliberately pretended to forget because magic is, simply put, a lot more fun.