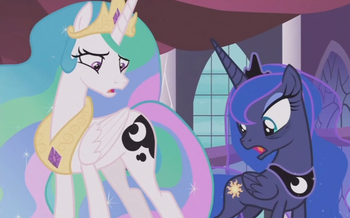 Things seem markedly different...
"Neither of you believes your sister knows how hard it is to be you. So... this is your chance to prove it."
— Starlight Glimmer
Written by Joanna Lewis and Kristine Songco
Advertisement:

The Crystal Map selects Starlight Glimmer as its agent to solve a friendship problem in Canterlot, much to Twilight Sparkle's surprise (up until then the map had only sent members of the Mane Six and almost always in pairs). She worries that the problem will be more than her student can handle alone.

Starlight suspects that the friendship problem is between the two royal sisters. Her first morning in Canterlot, Celestia makes elaborate pancakes for everyone, but Luna is too tired to want breakfast. That night, Luna hangs up lavender bundles as a way of providing more calming sleep, but Celestia is entertaining dignitaries and doesn't notice. This convinces Starlight that Celestia and Luna must be unknowingly hurting each other's feelings. She decides to go with her gut and confront the royal sisters the next morning. Though each is initially reluctant to admit to her resentment, Celestia and Luna soon devolve into a full-blown argument about which of them has it worse. On impulse, Starlight casts a spell: when the smoke clears, Celestia and Luna's cutie marks have been switched! The princesses are furious, but Starlight insists that the spell lasts only a day and suggests they take the opportunity to see what her sister's job is like. Luna and Celestia eventually give in, each believing the other's work will be easy.

With Starlight offering support, Luna sets out on a typical day in Celestia's hooves. But she struggles in her sister's role, finding it almost impossible to maintain the calm and cheerful demeanor Celestia seems to possess with no effort. The low point is when her smile fails at exactly the wrong moment, endangering the funding for a school field trip. She goes to bed exhausted, as does Starlight, leaving Celestia to face night duty alone. The princess enters the realm of dreams to find someone's nightmare to soothe, only to see Starlight wracked with anxiety about her rash decision. In the dream, Nightmare Moon appears and taunts Starlight about the harm she's done. Then Daybreaker, a violent version of Celestia, also appears and claims she never needed Luna — or anyone at all. Daybreaker and Nightmare Moon fight, and Starlight begins to have a nervous breakdown.

Celestia pulls Luna into Starlight's nightmare for help, but Luna doesn't have her own dream magic and can't intervene. She urges Celestia to trust herself, because she has realized now how strong Celestia must be to smile and keep up appearances for her subjects all the time. Encouraged, Celestia puts herself between Daybreaker and Nightmare Moon, blocking their magic before it does any damage to Starlight. Daybreaker commands Celestia to stop, but Celestia banishes Daybreaker with Luna's power.

Next morning, the sisters confide in each other, now knowing how hard the other works at her duties. Luna even makes pancakes (though they taste awful). Starlight joins them, still confused over last night's events. The sisters commend her for being bold enough to do what she did. Then Starlight's cutie mark glows, indicating that the friendship problem is solved, while the princesses's own marks return to normal. Twilight suddenly appears and drags Starlight away to get all of the details, with Luna leaving Celestia to deal with the fallout of her mess-up with the schoolchildren.

While inside Starlight Glimmer's nightmare, Princess Celestia is introduced to her hypothetical Super-Powered Evil Side: Daybreaker. Where as Princess Luna transformed into Nightmre Moon out of jealousy and bitterness towards her older sister, Daybreaker stems from Princess Celestia embracing her selfishness and stopped caring for anyone, potentially turning herself into a tyrannical ruler. This idea terrifies Celestia so much that she swears that she will never become her.

Example of:
Evil Me Scares Me

While inside Starlight Glimmer's nightmare, Princess Celestia is introduced to her hypothetical Super-Powered Evil Side: Daybreaker. Where as Princess Luna transformed into Nightmre Moon out of jealousy and bitterness towards her older sister, Daybreaker stems from Princess Celestia embracing her selfishness and stopped caring for anyone, potentially turning herself into a tyrannical ruler. This idea terrifies Celestia so much that she swears that she will never become her.