Recap / My Little Pony: Friendship Is Magic S9 E2 "The Beginning of the End  Part 2"

Continued from "The Beginning of the End – Part 1". 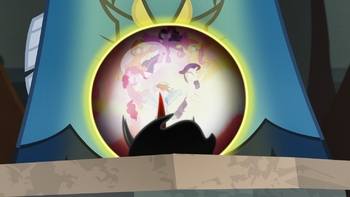 A vision of friendships yet to come.
Twilight Sparkle: You can't destroy our friendship, Sombra!
Rainbow Dash: And we keep telling bad guys.
Applejack: But y'all just don't seem to remember.
Mane Six: Friendship is magic!
Written by Joanna Lewis and Kristine Songco
Advertisement:

Twilight's shock at the destruction of the Elements makes it easy for King Sombra to trap her and her friends in a crystal cage, and after gloatingly mocking them he decides to enslave their hometown of Ponyville and conquer all of Equestria for himself. Twilight's friends help to urge her to think of a way out, and she realizes they can dig under the crystals. By the time they escape and arrive at Ponyville, not only is the whole of its population under Sombra's control, but the Everfree Forest is now beginning to invade without the Tree to stop it. The Mane Six decide to focus on trying to save the town first by fighting against the Forest, but even after hours of struggle the Forest continues to grow. They are suddenly surprised by the appearance of Celestia, Luna, and Star Swirl the Bearded. Star Swirl reveals he sensed the destruction of the Tree of Harmony and alerted Celestia and Luna, who Twilight informs of Sombra's return. Realizing she and Luna have left Canterlot defenseless, Celestia sends Twilight and the others to go to stop Sombra at Canterlot while they keep the Forest at bay.

Sombra, with help of his Ponyville forces, makes short work of taking over Canterlot, and by the time the Mane Six arrive they find that the only way in is to fight their friends and families. They try as many non-violent ways to end the conflict but are soon cornered. Twilight teleports them inside and they go to face Sombra in the throne room, though Twilight is unsure of how they can win without the Elements of Harmony. Discord appears to poke fun at their dire predicament, and Twilight begs him to intervene when they are attacked by brainwashed guards. Discord initially refuses, wanting Twilight and her friends to handle the problem on her own and prove herself capable of ruling Equestria. Twilight desperately pleads with Discord to help, and Discord finally agrees — using his Chaos magic to effortlessly defeat the guards. The Mane Six and Discord confront Sombra in the throne room, the latter effortlessly countering Sombra's attempts to attack them while lecturing Twilight on how disappointed he is that they couldn't handle Sombra on their own. When Discord lets slip that Fluttershy is his favorite of the Mane Six, Sombra fires a blast at her that Discord intercepts with his own body, and is seemingly severely wounded. As the Mane Six gather around him, he delivers a heartfelt speech reminding them that they still embody the traits that the physical Elements of Harmony represented. Twilight and her friends join forces and fire a blast of Friendship Magic that destroys Sombra and undoes the damage he did to Canterlot and Ponyville, freeing the brainwashed ponies from his control.

As the Mane Six see to Discord's well-being, Celestia and Luna arrive and announce that in light of recent events, they won't be retiring that moment. Twilight apologizes for having failed them, but Celestia and Luna assure her that they were still pleased with her performance, and that a trait of a good leader is knowing when to ask for help. Discord reveals his entire injury was an act designed to push Twilight into realizing the power she and her friends have without the Elements, and departs in a huff.

In the last scene, back at Grogar's lair, Grogar tells Chrysalis, Tirek, and Cozy Glow of Sombra's defeat, intimidating them into agreeing that they should work together to defeat Twilight, much to their dismay.