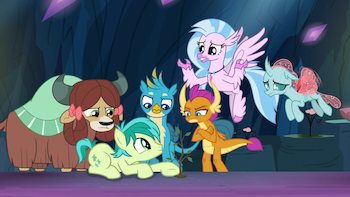 Sandbar channeling his inner Charlie Brown.
Sandbar: We're back 'cause the Tree of Harmony called us here.
Twilight Sparkle: [gasp]
Gallus: Don't feel bad it didn't reach out to you. We kinda have a special connection with it after last year.
Twilight Sparkle: But the Tree couldn't have called you. It's gone! Sombra destroyed it!
Young Six: [gasp]
Spike: Mmmmaybe next time, ease in with those truth bombs.
Advertisement:
Written by Nicole Dubuc

Each of the Young Six find themselves in a common dream, seemingly summoned by the Tree of Harmony to come at once. They each make their way to Ponyville, to Twilight's surprise, and she explains what has happened to the Tree following Sombra's destruction of it. The six feel that before they return home, they need to pay respects to the Tree. Twilight lets them go, though warns them that the area is now more dangerous.

At the cave where the Tree resided, the Six see the rubble that remains of the Tree, and start to wonder how they can pay respects. Suddenly, Thorax and Twilight show up, angry at Ocellus for having snuck away from the hive. Twilight realizes the students are here without the knowledge of their kingdoms, but agrees they can return and stay if they get permission from their elders. As Sandbar is local, he promises he'll help prepare the cave for when the other students return with permission.

The other five students get the needed signatures and return, but are shocked to find that Sandbar has completely cleared out the Tree's remains. He shows off a small sapling he has planted to replace it, but the others are not enthused about the idea and start to argue over how to honor the Tree. Gallus puts together a gaudy tourist attraction, Ocellus sets up a meditation garden, Silverstream paints the cave walls and floor to reflect her feelings about the Tree, and Smolder works on a stone monument sculpture. Their individual goals start to get in each other's way, and they end up ruining each other's projects. Yona urges them to work together and remember the role that the Tree played in helping them become friends, and drags out a cart loaded with its fragments - parked out of the way by Sandbar because it was too heavy for him to move alone.

The group get the idea to make a "tree"house for themselves from the pieces of the Tree. Their project quickly comes together to make a somewhat shaky and chaotic house. As they all go to enjoy it, it starts to glow, and they race out. The crystals of the Tree suddenly expand, planting themselves in the ground and exploding through the roof of the cave. Outside at the Castle of the Two Sisters, the Young Six find the Tree has now grown into a smaller castle made of crystals. The illusion of the Tree of Harmony appears and thanks them for their help, as by using their friendship to construct the "tree"house, it has helped restore her, creating something even more impressive than before. Twilight and Spike arrive, having felt the magical burst of energy, and are also shocked to find the new Treehouse of Harmony there as the Young Six explain what happened when they worked together. All of them decide to tour the new building together.