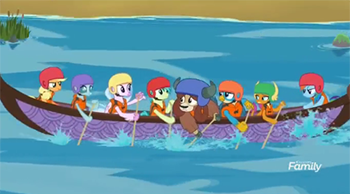 Right hoof versus left hoof. (And another hard-earned paycheck for Ashleigh Ball.)
Twilight Sparkle: You're not teaching teamwork! You're competing with each other! I thought you were past that!
Rainbow Dash: We are! Mostly.
Written by Kim Beyer-Johnson
Advertisement:

Fluttershy wins another Teacher of the Month award at Twilight's school, as voted by the students, frustrating Applejack and Rainbow Dash. Twilight suggests that the school run a field trip, and both AJ and Dash jump at the chance to lead it, hoping this will put them in good with the students to get the award the next month. Twilight agrees to let them both run it as long as they work together on it.

As the students gather, both AJ and Dash realize they have different ideas of what to do; AJ wants the students to practice building a shed together, while Dash wants them to go canoeing and break a speed record. During shed building, AJ has the students work carefully, but Dash wants to rush it, making a hastily-built shed that falls apart as soon as they try to put a roof on it. They move on to canoeing, where Dash wants them to paddle as fast as they can tiring the students out, while AJ suggests a more paced approach. Eventually, they get their act together and start paddling down a river. As they approach the finish line with the record still in sight, Dash tells the students to paddle the boat towards the left of a large rock, straight into a school of bite-acuda fish. AJ tells the students to go to the right, the longer route but avoiding the fish. As AJ and Dash argue, the boat runs straight into the rock. Everyone is safe due to their safety equipment, but Yona's lifejacket gets stuck on a branch and tears off her, and she cannot swim. Silverstream and a transformed Ocellus rescue her as everyone makes it to shore, just as Twilight comes along to ask how the field trip is going.

Twilight chews out AJ and Dash for being too competitive and not working together, and decides to take over the field trip. Luckily, AJ and Dash are able to convince her that they acknowledge the leadership each of them displayed through the day. Now convinced, Twilight begrudgingly gives them another chance, but tells them that their next activity will be a nature walk, something that neither of them can screw up before she leaves. AJ and Dash lead the students, overtly making sure they agree with each other at every branch of the path, which annoys the students. This ends up getting them lost among the woods outside of town, and with the day nearly over, Gallus finds they only have to cross one ravine to get back to Ponyville. AJ and Dash agree that they have to build a bridge to cross the ravine, but AJ wants to do it out of vines , while Dash wants to make it from sticks. They feign agreement while they each build a rather unsteady bridge across the ravine. Still feigning their agreement, they get into an argument and end up causing both bridges to fall on each other, trapping the two in a cage-like ball hanging precariously over the river where the bite-acudas are waiting. The students work together to rescue AJ and Dash, with Ocellus distracting the bite-acudas long enough for the others to pull the cage up to safety.

Eventually they get back to the school where Twilight is waiting for them. The students tell Twilight that both AJ and Dash were good teachers as their competitive and indecisive nature taught them how they can work together better to get around those problems, and want to consider them for the next teacher of the month award. As the students leave, AJ and Dash get into another argument about who did better during the field trip, and Twilight leaves the two to stew for a bit.