Recap / My Little Pony: Friendship Is Magic S5 E20 "The One Where Pinkie Pie Knows" 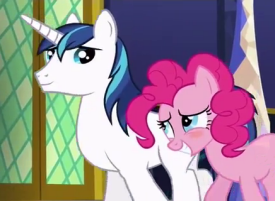 Somepony's got a secret, but they can't tell...
Twilight Sparkle: When Shining Armor said he wanted to come to the castle and visit, I started collecting things he liked when he was a colt as a surprise!
Pinkie Pie: Surprise?! [nervous laugh]
Twilight Sparkle: I've been so excited that it's been hard to keep it to myself!
Pinkie Pie: I have no idea what that's like!
Written by G.M. Berrow
Advertisement:

As Pinkie Pie is attempting to break her record on cupcake icing in Sugarcube Corner, Mrs. Cake comes in with a note, which holds surprising news: Princess Cadance and Shining Armor are coming to visit Twilight, and they're having a baby! Pinkie is initially ecstatic and eager to tell Twilight, but Mrs. Cake says that Twilight doesn't know yet. In fact, Shining Armor and Cadance want it kept a secret so that they can tell Twilight themselves. Pinkie agrees to keep quiet, but knows it's going to be an uphill battle.

At Twilight's castle, the Mane Six gather around the crystal map. Twilight already knows that Shining Armor and Cadance are coming, and she wants to make up a room for Shining Armor to stay in that has things from his childhood as a surprise to him. Twilight asks her friends to help her gather things for Shining Armor's guest room, with Pinkie struggling to keep herself quiet. After the meeting, Pinkie decides to just stay in her room so that she won't have to encounter anypony, but Mr. Cake needs deliveries made, and Pinkie had previously agreed to deliver them if he couldn't. After a disguise fails, Pinkie tries to avoid contact with anypony while making the deliveries. Just as it looks like she's in the clear, Gummy finds a list of previously-made "Pinkie promises" that she already agreed to do. Since Pinkie never breaks a Pinkie promise, she goes out to complete her list.

Pinkie Pie makes balloon animals at school, helps Mayor Mare with filing, and helps set up decorations for a sale at a furniture store. All the while, Pinkie becomes more and more stressed, trying to keep herself as quiet as possible. Finally, everything appears to be in place, but the Mane Six's increasing concern with Pinkie's erratic behavior makes them ask Pinkie what's wrong. The stress overwhelms Pinkie, and she attempts to blurt out the secret, but Shining Armor and Cadance arrive just at that moment, cutting her off. Shining Armor confides in Pinkie to keep quiet just a bit longer, since they want to tell Twilight in their own way.

Shining Armor and Cadance tell the Mane Six to meet them in town square, but when the Mane Six arrive, all they find is a note. It's a clue to a scavenger hunt, which Shining Armor used to send Twilight on when they were younger, with a book as a prize at the end. The Mane Six go to the children's school, Town Hall for Applejack's birth certificate, and the furniture store for a crib. Each time, Pinkie rushes the Mane Six along, unable to hold herself back much more. Finally, the Mane Six are lead to Sugarcube Corner, where Shining Armor and Cadance are waiting. Twilight is told while there is still a surprise, to piece together what all the clues have in common (school, foal, birth certificate, and crib), and quickly realizes just as Shining Armor and Cadance tell her; they're having a baby. Pinkie, overwhelmed with relief, collapses as Twilight is overjoyed at the news. As everypony eats cake at Sugarcube Corner to celebrate, Cadance asks Pinkie if keeping the secret was hard, with Pinkie lying that it was a piece of cake.