The various villainous characters that appear in the My Little Pony: Equestria Girls series, whether they're the films, TV specials, or the comics. 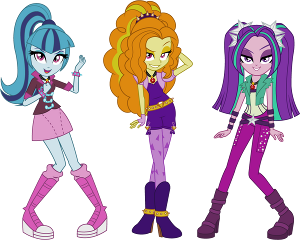 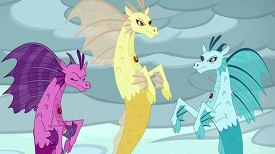 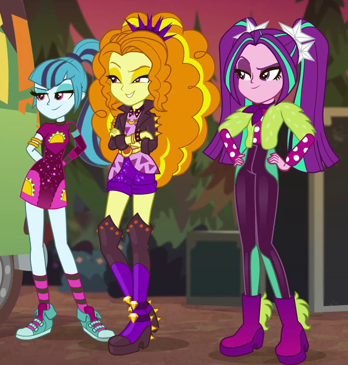 "Me and you, you and me
Why don't we see who is better?
We don't have to be one and the same thing
Oh, what's so wrong with a little competition?
Are you afraid of failing the audition?"
Debut: My Little Pony: Equestria Girls – Rainbow Rocks

The main villains of Rainbow Rocks, a trio of Evil Diva Sirens from Equestria. They use Mind-Control Music to create hatred and conflict between beings, and feed on the negative energy their victims produce in the process. They were banished to the human world from Equestria, which heavily weakened their powers and trapped them in human bodies. After witnessing the climax of the first film, they arrange for a Battle of the Bands at Canterlot High in the hopes of finding the source of the magic they felt and using it to regain their full power. They consist of leader Adagio Dazzle and her two cohorts, Sonata Dusk and Aria Blaze.

The episode "Shadow Play – Part 2" depicts their banishing from Ancient Equestria by the Pillars of Equestria, allies of Star Swirl, and subsequent comics expand on their villainy and battle with the Pillars. Prior to this, the comic My Little Pony: FIENDship Is Magic #3 depicted them as ancient pop stars seeking fame and adulation to feed on, and were banished by Star Swirl after he failed to beat them in a musical contest. Given that the comics are Broad Strokes canon, the FIENDship Is Magic issue is considered to have been Retconned, and the version of events shown in "Shadow Play" are the canon ones.

Adagio Dazzle
"There is Equestrian magic here. Their negative energy will give us the power we need to get this entire world to do our bidding."
Voiced by: Kazumi Evans
Aria Blaze
"So we're just gonna do what we always do? Stir up some trouble and then feed off the negative energy? Some plan, Adagio."
Voiced by: Diana Kaarina, Shylo Sharity (singing)
Advertisement:
Sonata Dusk
"We sing, like, all the time! It's how we get people to do what we want."
Voiced by: Maryke Hendrikse, Madeline Merlo (singing, Rainbow Rocks), Shannon Chan-Kent (singing, Sunset's Backstage Pass) 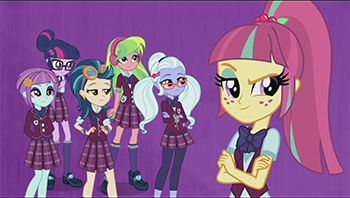 The Opposing Sports Team from Crystal Prep Academy that the Wondercolts must defeat at the Friendship Games in the third Equestria Girls movie. The core members the movie focuses on include Sour Sweet, Indigo Zap, Sugarcoat, Lemon Zest, Sunny Flare, and the human world's Twilight Sparkle.

Indigo Zap
"ARE WE GONNA WIN?!?!"
Voiced by: Kelly Sheridan
Lemon Zest
"Dude, you have gotta hear this!"
Voiced by: Shannon Chan-Kent
Sour Sweet
"Well, that's just marvelous... If you wanna lose before we even start!"
Voiced by: Sharon Alexander
Sugarcoat
"You are kinda being a doormat right now."
Voiced by: Sienna Bohn
Sunny Flare
"Sorry, dearie, but these games aren't about being nice."
Voiced by: Britt Irvin
Principal Abacus Cinch

"I think I've made it plain what will happen if we have the losing scores."
Debut: My Little Pony: Equestria Girls – Friendship Games
Voiced by: Iris Quinn

The principal of Crystal Prep Academy. Her school's undefeated streak against Canterlot High in the Friendship Games is threatened by CHS having a sudden rise in academic performances. Cinch wants to crush them to ensure Crystal Prep's reputation — and her own — remains untarnished. 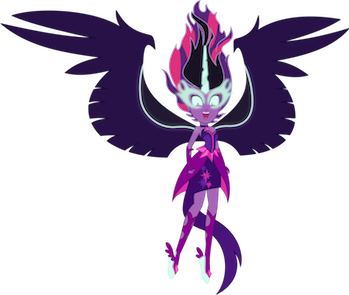 "Midnight Sparkle's a part of you! I'll always be there waiting in the darkest shadows of your mind! I'll be back, Twilight! And this time, I won't stop until I have all the magic!"
Debut: My Little Pony: Equestria Girls – Friendship Games
Voiced by: Tara Strong

Midnight Sparkle is human Twilight Sparkle's Superpowered Evil Side, when she's transformed and corrupted by the stolen magic of her device. An immensely powerful being, she opens random rifts toward Equestria to reaches its magic, uncaring that it could destroy the human world. Even after being defeated, she survives as a threatening alter ego inside Twilight's psyche. 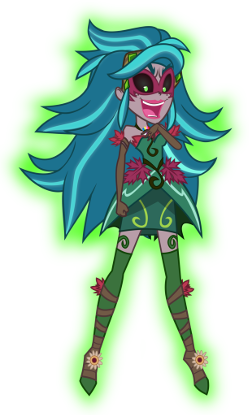 "Behold the beauty of nature in all its glory
No need to fear the vultures at the door
Right here you have me to protect you
Within these walls of thorns
For Everfree
For evermore!"
Debut: My Little Pony: Equestria Girls – Legend of Everfree
Voiced by: Enid-Raye Adams, Kelly Metzger (singing)

The eponymous "legend" of the movie. A dark spirit of the woods that lives in Camp Everfree, she is the guardian of the woods and plagued the ancestors of Gloriosa and Timber. She agreed to let their family live there, but vowed she would one day return to reclaim the land for the forest.

"This should be my night! I would have found a way to be in the film if you all had stayed out of it! I would have been Daring Do! Everyone would've loved me!"
Debut: My Little Pony: Equestria Girls – Magical Movie Night ("Movie Magic")
Voiced by: Ali Liebert

Canter Zoom's niece and backstage assistant who aspires to star in a movie one day. She'd do anything to get her big break — and this sends her on a dangerous collision course with the girls from Canterlot High School. 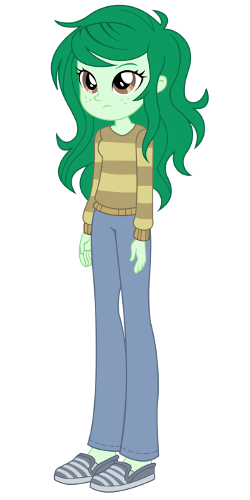 "How am I supposed to get back at you if nothing I do matters? I hate you!"
Debut: My Little Pony: Equestria Girls – Forgotten Friendship
Voiced by: Shannon Chan-Kent

A member of Canterlot High's Yearbook Club, and the only member of the Garden Club. Nobody seems to notice her around much.

"B-Y-B-B! Be yourself... but better!"
Debut: My Little Pony: Equestria Girls – Rollercoaster of Friendship
Voiced by: Tegan Moss

A costume designer who is a darling of social media, and the head of public relations for the Equestrialand theme park. 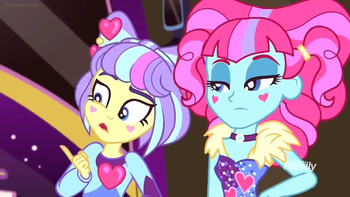 Kiwi Lollipop (K-Lo) and Supernova Zap (Su-Z), the duo of musicians who make up the band PostCrush. Reuniting for one last tour, they're billed as best friends who love to perform.