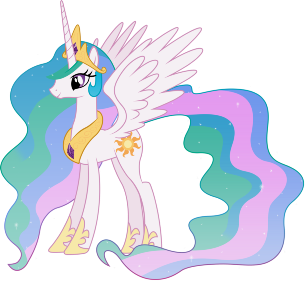 Co-ruler of Equestria. According to the Creation Myth, she governs both the sun and the moon, though she originally commanded "merely" the former and only assumed control of the latter after a disagreement with her sister. However, since said sister's return, she has passed the reigns of the moon back to Luna. A white-winged alicorn with a multicolored ethereal mane, she is noticeably taller and more slender than her subjects.