There is a whole stable of other background ponies who recur throughout the series. These ponies aren't quite as common, tropable, or popular as the above ponies, or we simply haven't gotten around to giving them their own entries. Some of them, too, have made their marks on the fanbase, if not to the extent of the more prominent.

To see a comprehensive list of most ponies (background and otherwise) from the show, go to the Friendship Is Magic Wiki

open/close all folders
Other ponies and their tropes
Advertisement:

These characters act and are used just like background ponies except for the simple fact that they're not ponies. Some of the hoofed species on this list currently fall into Furry Confusion territory seeing as many of them are seemingly treated as any other domesticated animal yet at the same time can talk with the ponies or act in a rather civilized manner.
Non-Ponies List 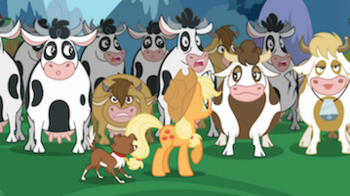 "Oh my! Begging your pardon, Applejack, but Mooriella here saw one of those nasty snakes. And it just gave us all the willies, dontcha know."
—Daisy Jo, explaining what caused their stampede in "Applebuck Season"
Debut: "Applebuck Season"

The cows from "Applebuck Season", "Boast Busters", "A Friend in Deed", "One Bad Apple", and "Sleepless in Ponyville" produce Ponyville's daily supply of fresh milk, but they get spooked by snakes easily. The oxen from "Hearts and Hooves Day" and "Apple Family Reunion" pull carts. 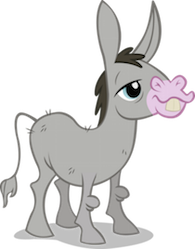 "None taken."
Debut: "Applebuck Season"
Voiced by: James "Wootie" Woottonnote according to this

A polite and friendly fellow who isn't easily offended. He appears in "Applebuck Season", "Hurricane Fluttershy" and "One Bad Apple". 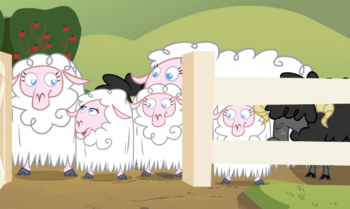 Woolly animals that come in different colors. "Sisterhooves Social" shows a flock of white and black sheep presumably kept at Sweet Apple Acres for their wool. "Dragon Quest" shows a few wild black sheep up in the snowy mountains, one of whom lets Spike hitch a ride on him. In "Party Pooped", another flock halts Pinkie's train by loitering on the tracks. 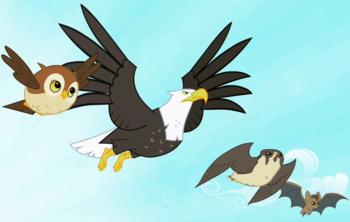 The four finalists
Debut: "May the Best Pet Win!"

A group of twelve flying animals — a hummingbird, an owl, a male and a female mallard, a monarch butterfly, a peregrine falcon, a bald eagle, a toucan, a ladybug, a wasp, a flamingo and a bat — who compete to be Rainbow's pet when she decides she wants an animal companion of her own. To do this, she puts them through a series of trials to test their speed, agility, guts, style, coolness, awesomeness and radicalness, culminating in four finalists racing her through Ghastly Gorge. 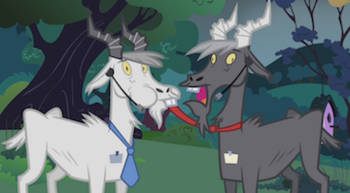 Debut: "Putting Your Hoof Down"

One shows up as a pet at Fluttershy's cottage in "May the Best Pet Win!", "Magical Mystery Cure" and "Princess Twilight Sparkle, part 1", and two others appear as Iron Will's assistants in "Putting Your Hoof Down" and "Once Upon a Zeppelin". They invoke Furry Confusion more than other creatures, since they don't talk and other goats are treated as pets, but Iron Will's are able to operate electric devices and wear ties. 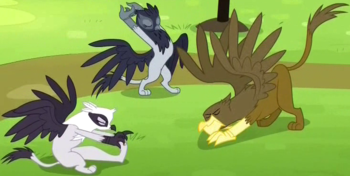 A set of nameless griffons who competed in the Rainbow Falls relay team qualifying round, and later appear in the Games proper in "Equestria Games".

A collection of monsters and weird creatures that turn up whenever the show needs bizarre, nonspecific monsters to populate a strange location, such as the Scariest Cave in Equestria, a beast seller's menagerie, Discord's dimension or the pit of Tartarus. 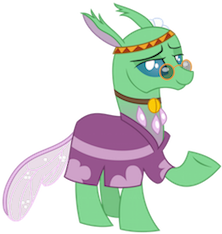 Debut: "To Change a Changeling"
Voiced by: Ellen-Ray Hennessy

A mint green changeling who wears rather hippie-ish robes. As the name implies, they run the Feelings Forum, a place where the post-reformation changelings go to air their issues and grievances.

These are the other creatures that inhabit Equestria. They are mostly non-sapient, but they display some behavior that suggests otherwise. Most of Ponyville's animals appear to be under the care of Fluttershy. They can also be potential companions for ponies.