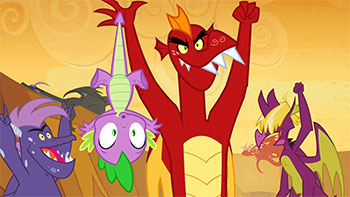 A SPIKE draws near! Command?
Spike: I'm going on a quest of self-discovery! I'm going to learn what it means to be a dragon! And the only way I'm gonna do that is to join the Dragon Migration!
Written by Merriwether Williams
Advertisement:

On the outskirts of Ponyville, the Mane Six are preparing a spot to watch the once-in-a-generation Great Dragon Migration (except Fluttershy, who still hasn't gotten over her fear of dragons and refuses to join the others). Spike is on hand (in a pink apron) to serve them tea and muffins, and Rainbow Dash can't help but poke fun at him for not being as intimidating as the full-grown dragons. The other girls chime in with their own thoughts on how Spike isn't big, tough and scary like the other dragons, and their remarks fill Spike with self-doubt.

That night, Spike is still sad and restless from realizing he doesn't know where he came from. Twilight apologetically tells him she never knew where his egg came from, but offers to do research to help him find out his history. They go through the entire library, but come up with nothing; dragons are too reclusive (and scary) for ponies to learn much about them. When Rainbow Dash and Rarity show up to invite them to breakfast, Twilight accepts, but Spike announces that he's going to undertake a quest to find out who he is — by joining the dragon migration. Rarity and Rainbow Dash protest, but Twilight supports Spike's decision and encourages him to tell her everything when he returns. The girls wave Spike off with smiles on their faces, but as soon as he's out of earshot...

Spike follows the dragon migration, crossing snowy peaks and deep dark forests to find the dragons roosting in the caldera of a volcano. Twilight, Rainbow Dash, and Rarity (in a hastily-constructed dragon costume) arrive shortly thereafter. The only dragons who deign to notice Spike are a group of adolescents, who immediately set to teasing Spike for not having wings and for being raised by ponies. They challenge him to prove his worth as a dragon through a belching contest, tail wrestling (which Spike wins because his opponent was the costumed ponies), King of the Hoard, and finally a lava cannonball contest. Spike does a belly-flop instead of a cannonball, but the older dragons are sufficiently impressed to declare him an official "rookie dragon". Then they take him along to raid a phoenix nest.

The phoenix family flies off after scaring away the teen dragons; the teens, in turn, find Spike and his egg, then goad him to prove himself by smashing it. After a moment's hesitation, Spike refuses to bow to peer pressure, and when the gang turn on him, Twilight Sparkle, Rainbow Dash, and Rarity arrive to defend their friend. Before a fight can begin, Spike makes a run for it, and the ponies follow. After a brief chase, Twilight teleports them to safety.

Happily back in Ponyville, Spike writes a letter to Princess Celestia, explaining that he's learned that his real family are the ones who love and care for him. He also hatches the abandoned phoenix egg, and welcomes "Peewee" into their family.