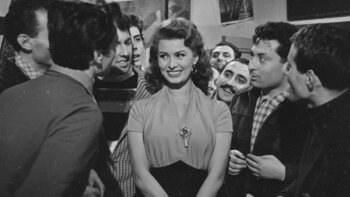 The Sign of Venus is a 1955 comedy from Italy, directed by Dino Risi.

It focuses on two young cousins in Rome, looking for love. Agnese (Sophia Loren, already a big star in Italy but still a couple of years away from breaking out internationally) is a jaw-dropping beauty, indeed perhaps too beautiful, as men swarm around her like bees to honey. She complains that no one respects her as a person. Her cousin Cesira (Franca Valeri, who co-wrote the screenplay), isn't all that sympathetic. Cesira is lonely and would like to find a man, but despite being pleasantly pretty she can't get any male attention while in the company of her sexy cousin. She goes to a fortune teller, who reads the tarot cards and says that Cesira is entering the "period of Venus", a time when she has a good chance of finding true love.

Vittorio De Sica didn't direct this one, but appears onscreen as Alessio, a charming but stone-broke poet who takes Cesira out on a disastrous date.