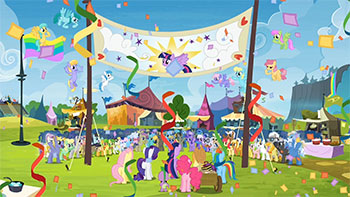 The Mane Six head to the Rainbow Falls Traders Exchange, a massive trading festival. Twilight is there on royal duty as the princess designated to oversee the proceedings, making sure that every trade is fair, and that both ponies in a trade get what they want. Rainbow Dash wants a first edition of a Daring Do book, so Fluttershy offers to help Rainbow get it by offering her bear whistle, which she wants to trade for a bird call. Applejack and Rarity pool their resources to get a vintage item they can't live without, Spike has a mint-condition comic book he wants to trade for another one, and Twilight wants to trade away books she doesn't need anymore.

Rainbow Dash offers her lucky horseshoe for the Daring Do book, but the trader turns it down, instead wanting an Orthros for it. Over at the ancient beast stall, Fluttershy quickly befriends the Orthros, but its trader isn't interested in Rainbow's horseshoe either. However, the Orthros breaks one of its trader's lamps, causing him to admit that he could use a new one. This leads to a rapid chain of deals, with Rainbow finally trading her rusty horseshoe for a crystal chalice, the last thing she needs to start the trade. Meanwhile, Applejack and Rarity each find a very rare vintage item that they want, but either item would cost all of their pooled trade resources to get it. Neither Applejack nor Rarity sees the value in what the other wants, and they quickly begin to argue over who should get to make her trade. Elsewhere, Pinkie Pie stops Twilight from trading away her books just to get rid of them, setting up a booth near Twilight's exchange post where she constantly boasts how the books made Twilight a princess, which Twilight doesn't like.

As the day progresses, Applejack and Rarity try to one-up each other, claiming to be the better friend by giving all of their trade stash to the other. Rainbow and Fluttershy finally get the Orthros, but they're blocked by a crowd. Fluttershy uses her bear call to disperse the crowd, dropping it in the process, though Fluttershy says there's nothing more valuable to her than Rainbow Dash. But, when the pegasi finally make it to the Daring Do trading stand, the book's owner no longer wants to trade for the Orthros, unless Fluttershy trains the Orthros to be a household pet. Fluttershy agrees to get the Orthros trained, which gets Rainbow Dash her book. However, Rainbow realizes, only too late, what she's agreed to.

Pinkie Pie's constant overselling of the books as the possessions of a princess makes everypony no longer want them, seeing them as far too expensive. This also makes Twilight realize how valuable her books are and decide to keep them all. Meanwhile, Rainbow Dash pleads her case before Twilight that her trade wasn't fair to get the Orthros back. Twilight's hooves are tied, but Rainbow says that there is nothing more valuable than a friend to her, even though she may have forgotten it for a time. The Daring Do fan is moved, and she agrees to trade the Orthros back for the book.

On the train ride home, Applejack and Rarity reveal that they each traded their stash for a small trinket similar to what the other wanted. They start to argue again over who is the better friend, but Rainbow interjects, saying that they should be happy that they were willing to trade away their things for each other. Rainbow also reveals she traded away the Orthros for a bird call, which she gives to Fluttershy. Twilight also digs out an old paperback copy of the Daring Do book Rainbow wanted from her stash, which she gives to Rainbow as the Mane Six gather around to hear Rainbow read it.