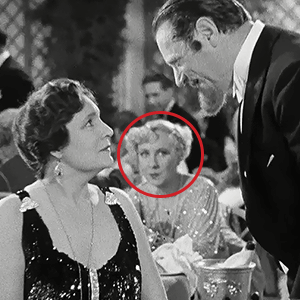 A specific form of Breaking the Fourth Wall accomplished merely by looking directly at the camera. Usually done by accident, by amateur actors who happen to notice a camera is pointed at them. The trouble here is that the editor didn't catch it, allowing the character to make eye contact with the audience. Typically a film or live TV trope, especially in dramas.

Intentional occurrences fall under Aside Glance or Fourth-Wall Observer.

Contrast with No Fourth Wall (thus including documentaries and reality TV), where the cast is aware of the audience, which — in turn — is aware of the production crew. Not to be confused with actually spiking a camera, which would probably fall under Camera Abuse.