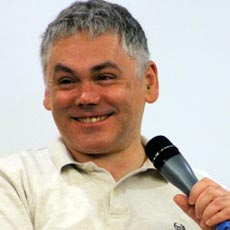 Matthew Waterhouse at a convention in Swansea.
"... I think I knew even less about the character of Adric than the rest of the team. Who was he? Where did he come from?"
Advertisement:

Ask any fan of classic Doctor Who which companion they deem to be the most annoying/irritating/controversial, and nine times out of ten they will say Adric. After all, a character who was often portrayed as an arrogant, misogynistic and generally unsympathetic Bratty Half-Pint generally doesn't go down well with an audience.

According to The Other Wiki, Matthew Waterhouse was born on the 19th of December, 1961 (some sources list his birthdate as 1962) in Haywards Heath, West Sussex. He was also a great fan of Doctor Who in his childhood and teenage years, collecting every bit of merchandising under the sun and later joining The Doctor Who Appreciation Society. He had an older brother who was also briefly an actor - this and the omnipresence of Doctor Who in Waterhouse's life ultimately made him want to become an actor as well. Unfortunately, Waterhouse's older brother died by suicide after an ill-fated romance, which lead to Reality Subtext in Adric's first serial, Full Circle, when Adric's older brother dies at the hands of the Marshmen.

Adric was written to be a fairly wiry yet bratty teenager, something that many fans felt wasn't properly realised due to Waterhouse's inexperience in acting (prior to Doctor Who, he was a BBC clerk with a bit part in the 1980 John Duttine miniseries To Serve Them All My Days)- Equity in particular kicked up a fuss as he wasn't a member. Waterhouse himself even attracted controversy after some of his colleagues expressed their impressions that he was perhaps a little too much like the character he was meant to be portraying in Real Life (Lalla Ward's expressed sentiments about him are a prime example). While filming "Kinda" he decided to advise Richard Todd (an Oscar-nominated actor) on acting, which according to Waterhouse was a sarcastic throwaway joke that was gravely misread on set.

However, in recent years there have been arguments made in favour of Waterhouse as more and more fans of Doctor Who pinpoint Adric's failings as a fault of the writers rather than the actor, as evidenced here

. Many more articles on the internet were written throughout The '90s and the Turn of the Millennium defending Adric and Waterhouse, though sadly they no longer exist. Waterhouse also has a sizeable young fanbase introduced via the new series, as evidenced here

Since Doctor Who he's gone on to have a few small acting roles (his bigger ones were concentrated in theatre) and has written and published the novels Fates, Flowers: A Comedy of New York, Vanitas: A Comedy of New York and Precious Liars - a trilogy centred around intertwining events taking place in New York City. In 2016, he published a short story anthology, entitled Sugar. More relevantly in terms of fans, he has also authored a memoir entitled Blue Box Boy about his time on Doctor Who. Beginning in 2014, he reprised the role of Adric for a series of Big Finish Doctor Who audio plays. He was a permanent resident of the United States from 1998 to 2016 before moving back to the UK that year. Since then, he has starred in and written myriad Dark Shadows audio dramas (another franchise he has been a fan of since childhood).