The Equestria Girls / The Rainbooms 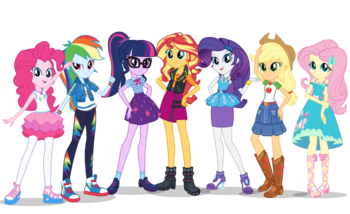 You are my Equestria Girls!

A group of seven high-school girls consisting of Sunset Shimmer and the human counterparts of Twilight Sparkle and her friends in Ponyville. Between Canterlot High School being the site of the portal between the two worlds, and the girls themselves being Touched by Vorlons and exposed to Equestrian magic, they're at the center of the plots of the series, variably being targeted by an antagonist or having to rise to stop them. 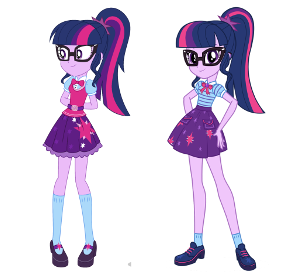 Twilight Sparkle's human counterpart, an asocial studious bookworm attending Crystal Prep Academy, the rival school to Canterlot High. During the events of Friendship Games, Twilight meets the Rainbooms when she attempts to study their Equestrian magic, to disastrous results. Bonding with the group during the games and never feeling accepted at Crystal Prep anyway, Twilight transfers to Canterlot High and continues her friendship with the girls. Her magic manifests as telekinesis. 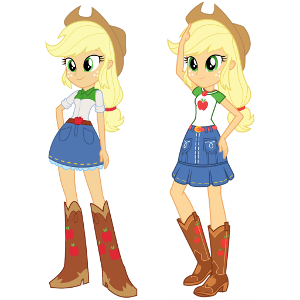 "To be honest, I'd say the whole experience brought everyone at Canterlot High closer than ever before!"
Debut: My Little Pony: Equestria Girls
Voiced by: Ashleigh Ball

The human counterpart of Applejack, her family helps supply foodstuffs to Canterlot High, and she serves as the bass player of the Rainbooms. Via her magic she has Super Strength. 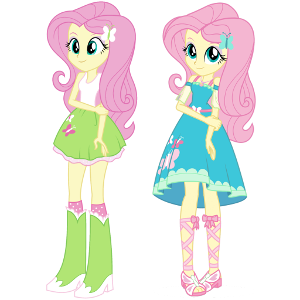 Fluttershy's human counterpart, she's a volunteer at the local animal shelter and plays tambourine for the Rainbooms. With her magic she can talk to animals and control them to an extent. 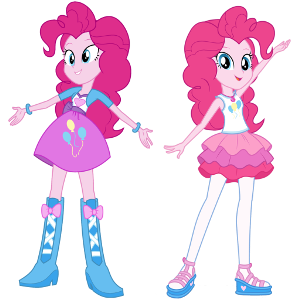 Event planner for Canterlot High and baking enthusiast in her spare time, Pinkie plays drums for the Rainbooms. Her magic lets her infuse sugary foodstuffs with energy to make them explode. 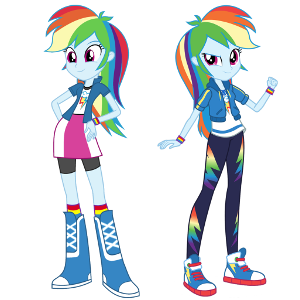 "Duh! It was my idea to start the Rainbooms so we could be in the showcase. Plus, I'm the lead singer and guitarist."
Debut: My Little Pony: Equestria Girls
Voiced by: Ashleigh Ball

Captain of apparently all of Canterlot High's sports teams, as well as lead guitarist for the Rainbooms. Her magic gives her Super Speed. 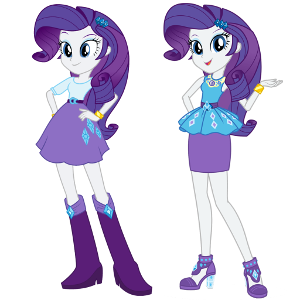 "Don't be silly, darling! Putting effort into clothes is what I live for, and spending time on my friends fills me with energy!"
Debut: My Little Pony: Equestria Girls
Voiced by: Tabitha St. Germain, Kazumi Evans (singing)

A fashion designer working at a local boutique, she plays keytar for the Rainbooms after her initial choice, the piano, didn't pan out. Her magic lets her generate diamond-shaped barriers of energy. 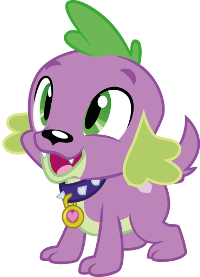 "All I know is I chased that pointy rabbit through the glowy thing and then I was somewhere else. Next thing I knew, I was back in that nice girl's arms and I could talk! I don't really understand why I couldn't before. I mean, it's so easy."
Debut: My Little Pony: Equestria Girls – Rainbow Rocks
Voiced by: Cathy Weseluck

Twilight's Loyal Animal Companion, and Spike the Dragon's counterpart from the Human World. He was originally a regular non-talking dog, but a mishap involving Fluttershy's magic and Twilight's magic-collecting device grants him the ability to speak.