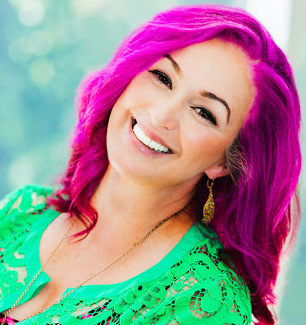 "T-Bone is one of the finest actors it has ever been my pleasure to work with. Always professional yet always at ease and able to deliver the goods, T-Bone has a phenomenal talent at voicing animation. She truly is able to bring a character to life, and puts me as a voice director in the enviable position of not having to get a good take, but of having to pick the best one. It's a pleasure to get to work with such an inspired talent. And she brings cookies, which is always nice. Wow, I kinda feel like I cheated on my wife..."
—Karl Willems, voice director, The Ocean Group.
Advertisement:

Shut up, shut up, SHUT UP! Tabitha St. Germain has graced your tiny wiki so that you may behold the real Princess of the Night!

Tabitha St. Germain (born October 30, 1964 in Boston, Massachusetts) is an award winning Canadian stage actress. She made the transition from stage work to voice work, and has since become one of the core female voice actresses working with The Ocean Group in Vancouver, British Columbia, Canada. From the start of her career up until the mid '90s, she was a Toronto based actress and went by the alias of "Paulina Gillis;" during that time she provided the voices of Kootie Pie Koopa in the Super Mario Bros. cartoons, Spryte the fairy in The Legend of Zelda cartoon, Miss Demeanor in C.O.P.S. (1988) and Ginger in the Beetlejuice TV series.

Perhaps her most popular anime role is as the original voice the eponymous character of Shakugan no Shana. Most sectors agree that her portrayal of the character is more badass than Rie Kugimiya's in the original. On the Western front she's gotten a lot of praise for being the voice of My Little Pony, voicing a ton of characters across two & a half generations. She's currently best known for Rarity, one of the six main characters of My Little Pony: Friendship Is Magic, whose over-dramatic performance won over many bronies.