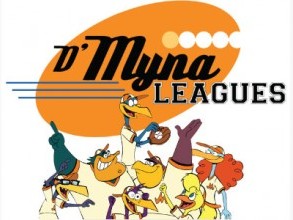 D'Myna Leagues (2000-2004) was a little-known Canadian animated television show that ran for 2 seasons, with 26 episodes on CTV. It was created by Blair Peters, and produced by Studio B Productions. It also aired in the United States on The WB 100+ Station Group.

The show starred a minor league baseball team known as the Mynaville Mynas, composed entirely on anthropomorphic birds in a World of Funny Animals. The team members are:

Their main opposition came from the commissioner, a cat named Radcliff, as well as his toadies Paully and Schlitzy. He sought to ruin the Mynas' games and sabotage their careers, driving down public interest in baseball and making their stadium unprofitable - thus convincing Divinity Plunkett the owner of both the Mynas and the stadium to let him buy it, so he could demolish it and make his own amusement park on the property.

Interesting fact: This was the very first cartoon produced in Canada to integrate 3D locations in a 2D series.