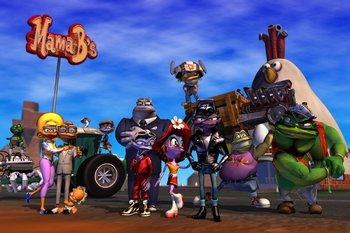 Weird-Ohs was a short-lived computer-animated cartoon series that aired on Fox Family and YTV in 1999. Running only 13 episodes in total, with each episode containing two 10 minute stories, it was one of the early products of Rainmaker Entertainment, back when they were still known as Mainframe Entertainment. Inspired by the Hawk Model Company's 1960s line of "Weird-ohs Car-icky-tures", a series of monster-driven hot-rod and dragster caricature assemble-and-paint model kits, Weird-Ohs tells the story of a small band of crazies living in "Weirdsville", a town filled with car-obsessed monsters stated to lie just off of Route 66, revolving in particular around the hijinks of young Digger and his older, dumber partner Eddie in the face of their need for entertainment and Digger's rivalry with his older sister Portia and local jerks Wade and Louie.

The entire cast of characters consists of: