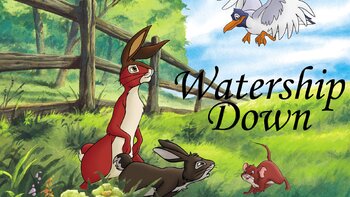 A British-Canadian animated children's series based on the novel Watership Down. It aired for three seasons from 1999–2001 on YTV in Canada, and CITV in the UK, though the latter did not broadcast the third season.

The first two seasons adapt the basic plot of the novel, following a group of rabbits who leave their endangered warren in search for a new home.

In the first two seasons, it primarily changes aspects of the characters and story to make it a little less grim e.g. making Blackberry female to add more diversity to the predominantly male cast. It has an all-star voice cast of well-known British actors and comedians, including Phil Jupitus, Rik Mayall, Stephen Fry, Jane Horrocks, Dawn French and even John Hurt returned, but voiced Woundwort instead of Hazel. The third season uses original storylines, having overtaken the end of the novel, and is darker in tone.