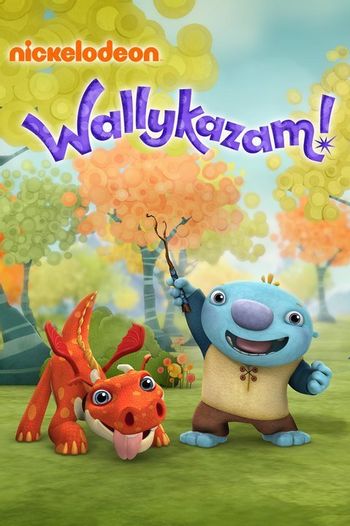 "Anything is possible with Wally, all you need is a word!"
An animated interactive comedy for preschoolers created by Adam Peltzman, a Nick Jr. veteran who previously wrote for Blue's Clues, Wonder Pets! and The Backyardigans. The show centers on the adventures of Wally Trollman and his pet dragon, Norville.
Advertisement:

Wally and Norville live in a mythical forest among giants, goblins, ogres, sprites, and fantastical creatures of every shape and size. But Wally has a power like no other; using his magic stick, he can make any word spring to life! Each adventure has a new set of magic words that share a certain characteristic (they may start with a given letter, have a certain sound, or rhyme with each other). Wally uses these words to play with and transform the world around him. For example, if the magic words begin with "c" and have a hard "c" sound, Wally can create a castle, and launch himself into it with a catapult.

Wally uses his magic to solve problems, help friends, and overcome the antics of the forest's resident troublemaker, Bobgoblin. At times, however, his magic stick can cause unintended complications, such as conjuring a word that accidentally makes the whole forest go dark or sends his house galloping away! But Wally's magic stick ALWAYS helps kids learn new words and the basics of reading with each exciting, hilarious adventure.

This Show Contains Examples of:

On "Wallykazam," the Grab Crab (voiced by show creator Adam Peltzman) only says his own name in various inflections, save slipping in an "uh oh."

On "Wallykazam," the Grab Crab (voiced by show creator Adam Peltzman) only says his own name in various inflections, save slipping in an "uh oh."