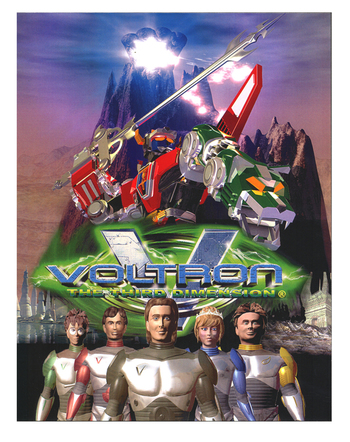 A Sequel Series to Voltron: Defender of the Universe, Voltron: The Third Dimension was an All-CGI Cartoon that was produced by Netter Digital Entertainment and aired from 1998 to 2000.

It has been years after the defeat of Lotor and King Zarkon. Voltron has been retired, Lotor is in prison, and King Zarkon has reformed, now an important figure in the Galaxy Alliance. However, when Lotor escapes from prison and teams up with the witch Haggar, Voltron must come together once again to stop his reign of evil.

Shares a Character Sheet with Voltron: Defender of the Universe and Voltron Force.