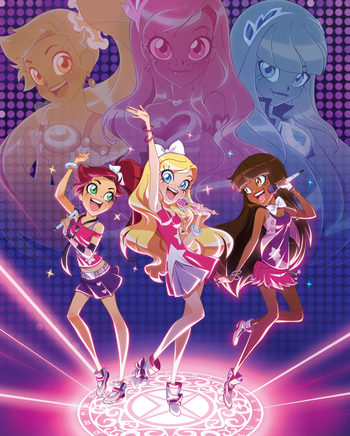 Fighting harm with crystal charm!note From left to right: Auriana, Iris, and Talia.
Raise your hands, you can touch the sky
Reach the stars, we can make you fly
Call the girls, fun is in the air
SOS, we'll be always there
— Chorus of Higher, which is also sung during the show's Theme Tune
Advertisement:

The show follows Iris (Kazumi Evans), an ordinary teenage girl whose beautiful singing causes strange occurrences to happen around her. After being rescued by two other teenage girls named Talia (Ashleigh Ball) and Auriana (Tabitha St. Germain) whom she met earlier at an audition for the eponymous Girl Group, she learns from them that she is actually a princess from a magical kingdom called Ephedia, which has been taken over by Gramorr (Mackenzie Gray) as she was sent away to Earth as an infant to be kept safe from him. To save her kingdom, she must now hone her newly-discovered magical powers with their help as they are tasked to locate and recover the Oracle Gems before Gramorr and his underlings, Praxina (Kelly Sheridan) and Mephisto (Vincent Tong), find them. All the while maintaining their Masquerade as young Idol Singers on Earth and helping out the locals along the way.

The music aspect is used heavily in marketing, with five music videos per season released outside the show. The title itself comes from the name of the band itself, and according to an interview on the official site, it is a play on "LOL," "i" as in the Spanish conjunction "y" meaning "and", and "rock."

As of March 2022, both the first and second seasons are available for streaming through Netflix and Prime Video. The show is currently on indefinite hiatus.

Iris has one thing to say towards Gramorr before channeling her Shanila for the Final Battle...

Example of:
You Monster!

Iris has one thing to say towards Gramorr before channeling her Shanila for the Final Battle...